Pearl Harbor Counterfactual: What If Admiral Chester W. Nimitz Had Been in Charge on December 7? 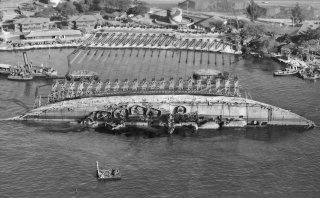 Would World War II have taken a different course had Admiral Chester W. Nimitz been in charge at Pearl Harbor on December 7, 1941, when the Japanese hammer blow fell? Almost assuredly. History may have followed a more positive trajectory had U.S. forces on Oahu been prepared for an aerial assault. Or it may have turned out worse—perhaps far, far worse.

That’s because individual leadership matters. It matters a great deal whether a Nimitz or an Admiral Husband Kimmel superintends grand endeavors such as naval warfare and postwar peacemaking.

Believe it or not, the claim that individuals count fuels an age-old argument within the ivory tower. Seventy years ago T. S. Eliot heralded the study of Greek history and political life because it deals with compact city-states for the most part. Writes Eliot, the classics have to do with “a small area, with men rather than masses, and with the human passions of individuals rather than with those vast impersonal forces which in our modern society are a necessary convenience of thought, and the study of which tends to obscure the study of human beings.”

The ancients accented the human factor—which helps explain their lasting allure. We see people like ourselves living in unfamiliar times and combating what often look like unendurable stresses. Perchance we learn from antiquity. Now, vast impersonal forces—geography, economics, demographics, and on and on—exist. And they’re important beyond a doubt. That’s why the masters of politics and strategy are so vehement about acquaintanceship with the surroundings. Florentine philosopher-statesman Niccolò Machiavelli, to name one, deems conforming to the times—and adapting to keep up with them—a cornerstone of republican or princely rule.

Sovereigns who fall out of tune with the times expose themselves to dire peril. You seldom read this in these pixels, but Karl Marx may have said it best: “Men make their own history, but they do not make it as they please; they do not make it under self-selected circumstances, but under circumstances existing already, given and transmitted from the past.” Vast impersonal forces may try to sweep us along to our destiny, and they certainly bound and constrain our actions. Yet we need not yield to them in full. We get a say.

Who accomplishes most while working within the boundaries imposed by impersonal forces is the best leader.

Whether Kimmel or Nimitz was commander-in-chief of the U.S. Pacific Fleet, then, is no idle question. Nor is it a flight of fancy. As biographer E. B. Potter recalls, Nimitz was offered CINCPAC early in 1941, after President Franklin Roosevelt deposed Admiral James O. Richardson from the post. Yet Nimitz turned it down. He was serving in a plum job at the time as the overseer of the U.S. Navy’s Bureau of Navigation. Accepting, furthermore, would have vaulted him over candidates senior to him. He refused the appointment to avoid embittering long-serving officers with their sense of entitlement.

Such are the vagaries of flag-officer promotions.

To derive value from this foray into alt-history, consider how U.S. naval history may have changed had Chester Nimitz accepted appointment as CINCPAC in early 1941, as he well could have done, and how history may have changed after the Japanese attack. In effect that means subtracting Kimmel’s contributions, virtues, and vices from history leading up to December 7 and postulating what Nimitz would have added to the mix. And it means speculating about whether Nimitz would have been cashiered—and pilloried—the way Kimmel was after Japan struck. If he was, another CINCPAC would have taken his place—perhaps prosecuting operations under a different philosophy heading into 1942. Kimmel himself might have gotten the nod.

Let’s extrapolate from what we know. A few things stand out from studying Nimitz’s life. To name one, he had a bit of Alice in Wonderland’s White Rabbit in his temperament, namely a bias against impulsive action. (The Rabbit famously upbraided Alice: “Don’t just do something, stand there!”) As historian Samuel Morison recalls, Nimitz was “a fortunate appointment” when he took over the Pacific Fleet after Pearl Harbor. He was “calm in demeanor,” and “had the prudence to wait through a lean period; to do nothing rash for the sake of doing something.” At the same time, says Morison, he displayed “the courage to take necessary risks, and the wisdom to select, from a variety of intelligence and opinions, the correct strategy to defeat Japan.”

So Nimitz was calm, prudent, and cautious, and he listened to and heeded counsel from others. Kimmel disregarded disturbing information such as indications that the Imperial Japanese Navy had improvised shallow-water torpedoes able to run within Pearl Harbor; rejected deploying torpedo nets to guard battleships’ sides; and took lightly the (admittedly vague) “war warning” that issued forth from Washington on November 27, instructing Pacific commanders to “execute an appropriate defensive deployment” as a precursor to war. The idea that Nimitz would have done the same beggars the imagination.

In all likelihood, then, U.S. naval forces would have been better prepared to defend themselves on December 7 than they were under Kimmel’s stewardship. If they were—if they put up a spirited fight and avoided massive losses of life and ships—then the hypothetical CINCPAC Nimitz may have escaped the fate that befell CINCPAC Kimmel in real life. He may have kept his job once the political uproar over the attack subsided. History may have unfolded more or less as it did. Things may even have gone better for America than they did, with a greater fraction of the fleet preserved for action, and with continuity of leadership in Honolulu.

Heavy surface combatants could have joined the 1942 carrier raids on Japanese-held Pacific islands—distracting the IJN from its conquests in Southeast Asia, cutting Japan’s navy down to size, and readying the American armada for a transpacific counteroffensive.

Suppose not, though. Perhaps Congress and the American people would have gone on the hunt for senior leaders’ scalps no matter the circumstances. If so, Nimitz may have gotten the Kimmel treatment, expelled from his post. Someone else would have shown up to take charge of the Pacific Fleet late in December 1941. Suppose Kimmel got the call, and the two historical figures in effect traded places. How would the Pacific War have unfolded had CINCPAC Kimmel made and executed strategy in 1942?

Edward Miller, the historian of War Plan Orange, does not play what-if, but he does hint that Kimmel would have been a disaster had he wielded command from 1942 on. Miller notes that Kimmel had a pedestrian understanding of naval strategy coupled with an insatiable lust for a Pacific Trafalgar. He was the archetypal battleship officer, moreover, exhibiting little appreciation for carrier aviation except as an auxiliary to the surface battle fleet. Aircraft carriers were for surveillance and targeting in his view, while battlewagons remained the chief repository of combat power.

Miller ascribes Kimmel’s failures in real life to his desire to be America’s Lord Horatio Nelson, an officer who swept enemies from the sea in epic battles. Yet he was out of step with the times, unsuited to the coming air age at sea. Machiavelli would nod knowingly. In all likelihood his tenure at CINCPAC would have been a short one—even if untainted by disaster at Pearl Harbor. A glory hound with an average understanding of trends in naval warfare would be prone to underperform as naval supremo.

To be fair to both of these officers, Machiavelli disparages individuals’ capacity to change, the Nimitzes as well as the Kimmels. They cannot master their natures, contends the Florentine scribe. In fact, he declares that republics have to change out people to change direction. They have to find new blood suited to new times.

Machiavelli may take his critique too far, but it is fair that it takes a jolt to goad individuals into change. What we know of Chester Nimitz’s wartime leadership comes from after the jolt administered to the U.S. Navy by Pearl Harbor. He wouldn’t have benefited from that catalyst as our hypothetical prewar CINCPAC, and thus he may not have showed the same sterling qualities he showed after garnering the job in real life. Contrariwise, it is conceivable that Pearl Harbor would have stunned Husband Kimmel into new flexibility of character. Seeing the fleet on which your heroic vision of yourself depends wounded gravely will do that for you.

Even so—even if Kimmel found new sobriety in the wake of the Japanese onslaught—it’s doubtful he would have overcome what Miller terms his “mundane” gift for strategy in a few short weeks. Nor would the IJN have transformed Kimmel into a master of naval aviation, even by dint of their aerial onslaught. Changing your temperament, however hard, is easier than reinventing your intellectual capacity and education on the fly. There’s little sign Kimmel was the rare individual who could pull it off.

So it seems we should be grateful that history took the pathway it did—that Nimitz turned down a beguiling job offer in early 1941 only to accept it in late 1941 under the press of events. Unlikely bedfellows Eliot, Machiavelli, and Marx might agree: Providence favors fools, drunkards, and the USA.