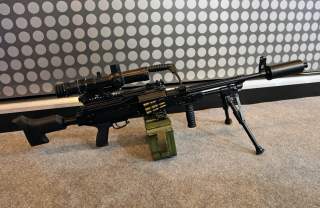 Somewhat recently, a Russian military fan page, anti_terrorism, on the popular Vkontakte social media platform, posted a photo of two Russian soldiers with Pecheneg-SP (GRAU Index 6P69) machine guns. The Pecheneg-SP variant is an “improved” variant of the PKP Pecheneg (6P41) machine gun, which is currently supplementing the PKM (6P6M) machine gun in Russian service. But oddly, the Pecheneg-SP appears to take some cues from the original PK (6P6) machine gun of 1961 vintage.

So how does the Pecheneg-SP improve on the previous generations of Kalashnikov’s machine gun?

Like most modern Russian military firearms, the Pecheneg-SP sports a Picatinny rail for optics. When the machine gun was shown at Rosoboronexpo-2014, this rail mounted the 1P89-3 low-power variable optic, but as shown in operational use, the guns are used with iron sights. From other pictures, Russian machine gunners seem to favor red dot sights on variants of the PK. In order to accommodate the Picatinny rail, the rear sight is moved forwards near the pivot point of the machine gun’s feed cover.

Other improvements include moving the bipod back onto the gas tube, which is said to increase accuracy by up to 70 percent. Ironically, the bipod was on the gas tube on the original PKM and PK and was moved to the end of the barrel on the PKP Pecheneg. Evidently, end users were not so thrilled with this change. Most photos of the Pecheneg-SP from arms expos show an upgraded Harris-style bipod on the machine gun as well, but the photo of the Pecheneg-SP from the field shows a conventional PKM-style bipod on the Pecheneg-SP, suggesting the more advanced bipod was abandoned during development.

There are also ergonomic improvements on the Pecheneg-SP. A vertical grip under the machine gun provides a solid handle for shooting it standing, and the pistol grip and buttstock are redesigned. The buttstock is designed to be adjustable for length of pull and foldable, and the pistol grip has additional girth to be easier to grip. The buttstock is reminiscent of the Rapid Fielding Initiative (RFI) buttstock that was retrofitted to American M249 Squad Automatic Weapons in the 2000s.

The body of the Pecheneg-SP is also said to incorporate titanium parts to reduce weight. A similar redesign was applied to the American M240 in the M240L variant which incorporates titanium parts as well. The ammo box is also revised with a plastic coating inside to reduce the rattle when moving.

Finally, the Pecheneg-SP comes with the option to mount a suppressor for reduced muzzle blast, firing sound, and muzzle flash. However, there are no photos of the Pecheneg-SP in the field, so this may remain a “factory only” option for some time.

Overall, the Pecheneg-SP presents an interesting upgrade path for the Russian military, which currently uses the PKM in a variety of variants. It could present an attractive upgrade option for some PKM users due to the standard rail, improved ergonomics, and lighter weight. There currently is a large aftermarket for PKMs and PKPs in Russia, with companies like ZenitCo making upgrade packages for the guns. There are even kits to convert PKMs and PKPs into bullpup machine guns, though these seem to be not so popular with serious users. But the Pecheneg-SP has the potential to supplant all of these upgrade kits in military usage, as the AK-12 has supplanted various upgrade kits for the AK-74M.