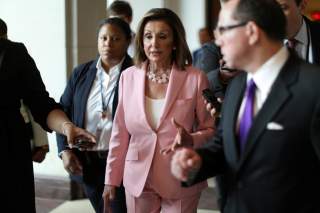 Democratic House Speaker Nancy Pelosi walked out on reporters Thursday after being asked about conducting a formal impeachment inquiry, adding that she won’t answer anymore questions on the topic.

The weekly press conference was cut short when Pelosi walked away after telling the press to focus on other topics, such as the Democratic House proposal, which has been dismissed by Republicans in the House, to expand background checks for buying guns, the Washington Examiner reported.

Pelosi said reporters seem “hung up” on the word impeachment after being asked again about formal impeachment proceedings against President Donald Trump.

“I’m not answering any more questions about a possible inquiry, investigation, and the rest,” Pelosi said Thursday. “Why is it you are hung up with a word over here when lives are at stake over there?” She walked out of the room after this comment.

The committee continued the impeachment narrative Thursday after a vote set parameters for a possible impeachment inquiry. The vote didn’t mention Trump by name, but many view it as further effort by Democrats to impeach Trump.

The vote passed 24-17 with all Democrats voting for it. All Republican voted against the resolution.

Despite Thursday’s inch towards an impeachment inquiry, Pelosi suggested Thursday that the only people into this topic are reporters.

“There is nothing different from one day to the next. We are still on the same path,” Pelosi told reporters. “You are the only ones who are so into this.”