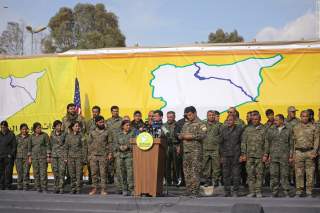 The vice president’s announcement came on the last day of the five-day ceasefire agreement he negotiated with Turkish President Recep Tayyip Erdogan during his Oct. 17 visit to Ankara with Secretary of State Mike Pompeo, which gave Kurdish fighters an opportunity to leave the Turkey-Syria border without being targeted by Turkish forces.

“Earlier, we received word from Syrian Defense Force’s commander that all of their military forces have withdrawn from the safe zone under Turkish military control,” Pence said at the gala.

“Before I came here, our team was communicating with both sides in the hope that a permanent ceasefire could soon take place, and those discussions are ongoing,” he added.

SDF commander Mazloum Abdi said Tuesday in a letter to Pence that the withdrawal at the safe zone had taken place, according to the Wall Street Journal.

The letter came on the same day Russian President Vladimir Putin and Erdogan negotiated a joint agreement to seize control of a large portion of what was previously Kurdish-held territory in northern Syria, giving Kurdish fighters six days to retreat more than 20 miles from the Turkey-Syria border, the New York Times reported.

“Only if Syria’s sovereignty and territorial integrity is respected can a long-lasting and solid stabilization in Syria be achieved,” Putin said during the meeting, according to NYT.

The House recently voted to condemn President Donald Trump’s decision to pull troops from Syria, and there have been bipartisan concerns that the U.S. abandoned its Kurdish allies who helped defeat the Islamic State.

But Pence supported the president in his remarks.

“America will always be grateful for our Kurdish allies and Syrian Defense Forces, who fought shoulder-to-shoulder and bravely with us in this fight,” Pence said. “Now that our military and our allies have achieved our objectives against ISIS, President Trump is keeping his word to the American people, and our troops are starting to come home.”

“Kurdish Syrian Defense Forces were strong allies in the fight against ISIS, and we will always be grateful. In the wake of Turkish forces invading Syria, President Trump imposed strong sanctions,” the vice president continued.

The U.S. agreed to lift sanctions Trump levied against Turkey in exchange for the ceasefire. The sanctions were issued in response to the nation’s “destabilizing actions in northern Syria” after the U.S. announced on Oct. 6 that it was withdrawing nearly all of its 1,000 troops from the region, Trump said in a statement.