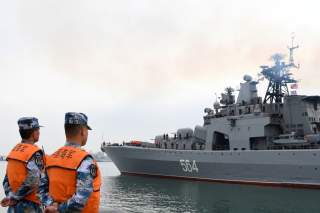 Key Point: The Pentagon deserves great credit for employing the full force of its tremendous analytical capabilities and official authority to shine a bright, inescapable spotlight on the PAFMM’s true nature and activities.

Finally, some good news from Washington! Last Thursday the Pentagon released its annual report to Congress on military and security developments involving the People’s Republic of China (PRC). The single most important revelation alone justifies the 145-page report’s $108,000 cost many times over. Even more than when last year’s report mentioned it for the first time, the U.S. government has officially deployed the formidable credibility of the world’s foremost intelligence collection and analytical capabilities to shine a spotlight and expose the shadowy People’s Armed Forces Maritime Militia (PAFMM). Previously, in beltway bureaucracy, the PAFMM was mentioned by Ronald O’Rourke in his Congressional Research Service report and by the U.S.-China Economic and Security Review Commission, which rightly recommended that the Department of Defense address this vital subject. Indeed, there is no substitute for the Pentagon’s credibility in this regard. By releasing these important facts officially and authoritatively, the 2018 report has performed a signal service.

Beijing uses the PAFMM to advance its disputed sovereignty claims across the South and East China Seas. The Maritime Militia, China’s third sea force, often operates in concert with China’s first sea force (the Navy) and second sea force (the Coast Guard). In an unprecedented accompanying Fact Sheet, the Pentagon’s 2018 report offers a recent example: “China . . . is willing to employ coercive measures to advance its interests and mitigate other countries’ opposition. . . . In August 2017, China conducted a coordinated PLA Navy (PLAN), China Coast Guard (CCG), and People’s Armed Forces Maritime Militia patrol around Thitu Island and planted a flag on Sandy Cay, a sandbar within 12 nautical miles of Subi Reef and Thitu Island, possibly in response to the Philippines’ reported plans to upgrade its runway on Thitu Island.”

Each PRC sea service is the maritime division of one of China’s three armed services, and each is the world’s largest by number of ships. “The PLAN, CCG, and People’s Armed Forces Maritime Militia (PAFMM) form the largest maritime force in the Indo-Pacific,” the report emphasizes. First, “The PLAN is the region’s largest navy, with more than 300 surface combatants, submarines, amphibious ships, patrol craft, and specialized types.” It is also the world’s largest navy numerically; as of August 17, 2018, the U.S. Navy has 282 deployable battle-force ships. Second, “Since 2010, the CCG’s fleet of large patrol ships (more than 1,000 tons) has more than doubled from approximately 60 to more than 130 ships,” the report adds, “making it by far the largest coast guard force in the world and increasing its capacity to conduct simultaneous, extended offshore operations in multiple disputed areas.” Third, Beijing has what is clearly the world’s largest and most capable maritime militia. One of the few maritime militia forces in existence today at all, it is virtually the only one charged with involvement in sovereignty disputes. Only Vietnam, one of the very last countries politically and bureaucratically similar to China, is known to have a roughly equivalent force with a roughly equivalent mission. Moreover, when it comes to forces at sea—militia or otherwise—Hanoi is simply not in the same league as Beijing and cannot compete either quantitatively or qualitatively.

Beijing’s use of the PAFMM undermines vital American and international interests in maintaining the regional status quo, including the rules and norms on which peace and prosperity depend. PAFMM forces engage in gray zone operations, at a level specifically designed to frustrate effective response by the other parties involved. One PRC source terms this PAFMM participation in “low-intensity maritime rights protection struggles”; the Pentagon’s report describes broader PAFMM and CCG “use of low-intensity coercion in maritime disputes.” “During periods of tension, official statements and state media seek to portray China as reactive,” the report explains. “China uses an opportunistically timed progression of incremental but intensifying steps to attempt to increase effective control over disputed areas and avoid escalation to military conflict.” In particular, “PAFMM units enable low-intensity coercion activities to advance territorial and maritime claims.” Because the PAFMM is virtually unique and tries to operate deceptively under the radar, it has remained publicly obscure for far too long even as it trolls with surprising success for advances in sovereignty disputes in seas along China’s contested periphery.

Fortunately, the U.S. government is well aware of the PAFMM’s predations and monitors it closely. In providing such detailed coverage of the PAFMM in its latest report, the Pentagon has strongly validated key findings from the Naval War College China Maritime Studies Institute’s (CMSI) open source research project on that subject, which is now entering its fifth year. In what follows, I share CMSI’s conclusions and the related text in the report.

A component of the People’s Armed Forces, China’s PAFMM operates under a direct military chain of command to conduct state-sponsored activities. The PAFMM is locally supported, but answers to the very top of China’s military bureaucracy: Commander-in-Chief Xi Jinping himself.

Part-time PAFMM units incorporate marine industry workers (e.g., fishermen) directly into China’s armed forces. As the Pentagon explains, “The PAFMM is a subset of China’s national militia, an armed reserve force of civilians available for mobilization. . . . Militia units organize around towns, villages, urban sub-districts, and enterprises, and vary widely in composition and mission.” While retaining day jobs, personnel (together with their ships) that meet the standards for induction into the PAFMM are organized and trained within the militia—as well as, in many cases, by China’s Navy—and activated on demand. As part of such efforts, “A large number of PAFMM vessels train with and assist the PLAN and CCG in tasks such as safeguarding maritime claims, surveillance and reconnaissance, fishery protection, logistics support, and search and rescue.” To further support and encourage PAFMM efforts, “The government subsidizes various local and provincial commercial organizations to operate militia vessels to perform ‘official’ missions on an ad hoc basis outside of their regular civilian commercial activities.”

Since 2015, starting in Sansha City in the Paracel Islands, China has been developing a new full-time PAFMM contingent: more professionalized, militarized, well-paid units including military recruits, crewing purpose-built vessels with mast-mounted water cannons for spraying and reinforced hulls for ramming. “In the past, the PAFMM rented fishing vessels from companies or individual fishermen, but China has built a state-owned fishing fleet for at least part of its maritime militia force in the South China Sea,” the Pentagon expounds. “The Hainan provincial government, adjacent to the South China Sea”—whose important role in PAFMM development my colleague Conor M. Kennedy and I explain here, here, and here—“ordered the building of 84 large militia fishing vessels with reinforced hulls and ammunition storage, which the militia received by the end of 2016, along with extensive subsidies to encourage frequent operations in the Spratly Islands.” The report elaborates: “This particular PAFMM unit is also China’s most professional, paid salaries independent of any clear commercial fishing responsibilities, and recruited from recently separated veterans.” Lacking fishing responsibilities, personnel train for peacetime and wartime contingencies, including with light arms, and deploy regularly to disputed South China Sea features even during fishing moratoriums.

PAFMM units have participated in manifold international sea incidents. As the Pentagon attests, “The militia has played significant roles in a number of military campaigns and coercive incidents over the years, including the 2009 harassment of the USNS IMPECCABLE conducting normal operations, the 2012 Scarborough Reef standoff, the 2014 Haiyang Shiyou-981 oil-rig standoff, and a large surge of ships in waters near the Senkakus in 2016.”

The last of these is particularly significant, since it is now one of several publicly documented examples of PAFMM involvement in international incidents in the East China Sea, but had not been conclusively confirmed by previously known open sources. Other examples, as documented in CMSI research to date, include swarming into the Senkaku Islands’ territorial sea in 1978 and harassment of USNS Howard O. Lorenzen in 2014. So, while the vast majority of publicly revealed incidents involving PAFMM forces have occurred throughout the South China Sea, the PAFMM also clearly operates and has been empowered to engage in provocative activities in the East China Sea as well. Any PRC attempts to deny that the PAFMM operates in the East China Sea, including in disruptively close proximity to foreign forces, may therefore be easily disproven. The Pentagon is clear: “The PAFMM . . . is active in the South and East China Seas.”

This conclusive exposure of PAFMM activities in the East China Sea should be an important reminder to policy-makers in Tokyo and Washington alike that Beijing is certain to continue to wield its third sea force as a tool of choice to probe and apply pressure vis-à-vis the Japanese-administered Senkaku Islands. These pinnacle-shaped features are the peak Sino-Japanese geographical flashpoint. As the current and previous U.S. administrations have affirmed explicitly, the Senkakus are covered under Article 5 of the U.S.-Japan Treaty of Mutual Cooperation and Security, which states, in part: “Each Party recognizes that an armed attack against either Party in the territories under the administration of Japan would be dangerous to its own peace and safety and declares that it would act to meet the common danger in accordance with its constitutional provisions and processes.”