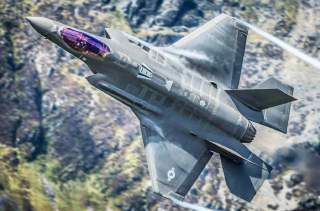 Ellen Lord, the Pentagon’s top weapons-buyer, on Jan. 14, 2020 said the military would replace the Autonomic Logistics Information System, or ALIS, with the less-complex Operational Data Integrated Network, or ODIN.

Maryland-based Lockheed Martin, the lead contractor on the trillion-dollar F-35 program, develops both ALIS and ODIN.

ALIS was projected to cost around $17 billion. Lord told Reuters that ODIN would fall under the same contract authority as ALIS did and would cost no more than the older system would have.

Problems with the automated logistics systems have vexed the F-35 program even as the airplane itself slowly has become cheaper to operate.

The Pentagon by 2025 hopes to drive down the plane’s hourly operating cost to $25,000, which is around as much as a much older F-16 costs to fly, according to Air Force Magazine reporter Rachel Cohen.

But problems with ALIS have hindered the military’s efforts to stabilize and drive down costs while also improving the F-35’s readiness.

Lockheed since the early 2000s has delivered more than 400 F-35s to the U.S. Air Force, Navy and Marines Corps against a total Pentagon requirement for around 2,300 of the single-engine planes. The F-35 is on track to replace many of the military’s older fighters including F-16s, F/A-18s and AV-8Bs. Many U.S. allies also are buying F-35s.

Lockheed’s ALIS was supposed to simplify the F-35’s logistics. Pilots and maintainers can use the computer-based system to plan missions, order spare parts and view technical data.

But ALIS never has worked right. The system “was blamed for delaying aircraft maintenance, one of the very things it was meant to facilitate,” Reuters explained.

“One Air Force unit estimated that it spent the equivalent of more than 45,000 hours per year performing additional tasks and manual workarounds because ALIS was not functioning as needed,” the Government Accountability Office reported in November 2019.

Besides not working for planning and maintenance, ALIS has proved to be controversial with some foreign F-35 users. Two unspecified U.S. allies even threatened to quit the F-35 program over data-security concerns.

The Pentagon is already looking for a replacement system even as it struggles to get ALIS to function, Cohen reported.

Fick said the Pentagon would fielding ALIS 3.5, an updated version of the system that includes around 300 fixes. “That comes as Air Force software coders, employees of F-35 manufacturer Lockheed Martin, and others continue to roll out software patches for the jet and ALIS,” Cohen added.

“Our efforts to stabilize and improve the usability of ALIS has driven trouble reports down 38 percent from their peak,” Lord told lawmakers at the same late-2019 hearing Fick attended. “These efforts mitigate risk while the department charts a path to the future of ALIS that will help deliver a more ready fleet at a lower cost."

But ALIS’s days were numbered. Lord told a House Armed Services subcommittee the Defense Department was working on a detailed plan for “ALIS Next.” That replacement system soon became ODIN. Lord said the new system would deploy in 2022, replacing almost all of ALIS’s functionality.

Lord said ODIN stores its data in a wireless “cloud” and can deliver information to maintainers in near-real-time while also being more secure than ALIS is. ODIN also requires fewer administrative tasks than ALIS does, Lord said. “We have heard our maintainers on the flight lines loud and clear when they say they want to spend less time on administrative maintenance on ALIS.”