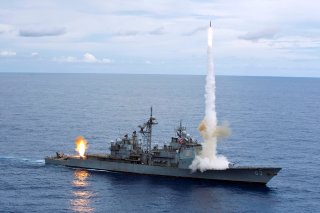 The Tomahawk Missile System enters a new era, one that marks a multiple-service procurement and will see newly-upgraded variants of the missile more widely used in the Department of Defense.

The U.S. Navy “awarded a $217.1 million contract May 24 to Raytheon Missile Systems to deliver 154 Tomahawk missiles to the Navy, Marine Corps, and Army by 2025,” Naval Air Systems Command explained in a statement.

“This is a major accomplishment for the program as we move forward into a new era for the Tomahawk Missile System,” said Capt. John Red, Tomahawk Weapons System program manager. “We look forward to delivering this capability not only to the fleet, but to our Marines and Soldiers around the globe.”

The U.S. Marine Corps is currently developing several experimental, ground-based missile launchers. One of these, the NMESIS, mates a pair of containerized Naval Strike Missiles to an unmanned Joint Light Tactical Vehicle, offering the Corps a mobile and remote-controlled stand-off anti-ship system.

The statement added that the Block V variant “features a NAV/COMMS upgrade that maintains the capability for in-flight updates and improved navigation” and that some of the Block V’s future capabilities “will include the Maritime Strike Tomahawk (MST) variant and the Joint Multiple Effects Warhead System (JMEWS).”

The statement added that the Tomahawk purchase will include the Tactical Tomahawk, also known as (TACTOM), and “the nation’s premier, all-weather, long-range, deep-strike offensive weapon against fixed and mobile targets, launched from surface, subsurface and ground platforms.”

The Marine Corps is developing a containerized system for Tomahawk missiles that is similar to its JLTV-NSM project. The Naval Air Systems statement explains that this contract “includes procurement of missiles to support stand up of the new Marine Corps units.”

The U.S. Army also has a Tomahawk system in the works. The U.S. Army’s Rapid Capabilities and Critical Technologies Office decided to “execute the contract in an effort to deliver the missiles on an accelerated schedule. The Army is leveraging PMA-280’s ongoing modernization efforts, investment strategies, and joint test events for its Mid-Range Capability program, a system that is on track to be delivered to its first Army unit in FY23.”

Despite the Tomahawk’s Cold War-era origin, this most recent purchase plan puts fresh air into the missile’s engines for the foreseeable future.