Is the Pentagon Killing Today’s Maritime Force to Save Tomorrow’s Force? 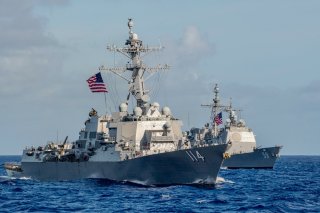 American society must choose between doing less in the world and spending more on defense. The government, people, and armed forces can make the conscious political choice to accumulate military might sufficient to fulfill today’s expansive ambitions. Or they can lower their sights, adopting humbler goals achievable with the armory currently on hand. The sea services—the U.S. Navy, Marine Corps, and Coast Guard—are one crucial implement in the U.S. armory, and a bipartisan consensus holds that the services are too small to execute their missions. By trying to do too much with too little, the Pentagon courts disappointment or defeat.

Political leaders must rebalance purpose with power for U.S. foreign policy to prosper.

Trendlines in the numbers of hulls and airframes are at issue. Differential Equations 101 cautions that the total amount of something dwindles if you siphon it off at a quicker rate than you add. That’s where the sea services find themselves. Retiring old platforms faster than shipbuilders manufacture replacements sends the inventory into decline by brute quantitative measures such as numbers of platforms and ordnance. Rather than bulk up the fleet to meet operational demands, U.S. Navy magnates envision shrinking it in the near term. Shipbuilding plans call for mothballing or scrapping aging (and some not-so-aging) ships and aircraft to free up funding to invest in a fleet built for a kaleidoscopic future replete with great-power competitors like Russia and China, middleweight troublemakers like Iran and North Korea, and nonstate antagonists like ISIS and Al Qaeda.

In a real sense, tomorrow’s navy is the enemy of today’s. And vice versa.

The hazards of shortchanging the fleet today are not lost on lawmakers. To name one, Rep. Rob Wittman (R-VA), the ranking member of the U.S. House Seapower and Projection Forces Committee, declares: “I continue to be perplexed as to our nation’s approach to deterring maritime conflict.” Nor is Rep. Wittman’s an especially partisan complaint. A fellow Virginian and sea-power proponent from across the aisle, Rep. Elaine Luria (D-VA), objects to the navy’s “divest-to-invest” scheme on similar grounds. Luria likes to take service leaders to task for pursuing a “Battle Force 2045” to prosecute far-off conflicts at the expense of a “Battle Force 2025” built to deter or defeat China in a near-term fracas.

A divest-to-invest strategy might yield a fleet equal to the challenges America will confront decades from now. But divestment might leave too little combat power in the fleet to, say, repel a Chinese assault on Taiwan in the next few years.

Wittman and Luria have a point about near-term battle preparedness. For instance, naval leaders want to retire some of the navy’s Ticonderoga-class guided-missile cruisers. Cruisers represented the state of the art in fleet air defense and strike missions during the Cold War and afterward, but they have fallen behind the times technologically and are increasingly expensive to upgrade and maintain. Divesting from tired hulls makes sense. Yet decommissioning them would remove “capacity” from the fleet. By capacity, military wonks mean mass—mass measured by numbers of hulls in the water, and mass measured by volume of firepower.

Mass is crucial to prevailing in wartime and deterring in peacetime.

Take it from the greats of military and maritime affairs. For Carl von Clausewitz and Alfred Thayer Mahan, strategy is the art and science of staging more firepower than the antagonist at the time and place of battle. Of being stronger where it matters, when it matters. Deterrence means convincing a potential foe that we could and would deploy superior firepower in times of armed strife—i.e., that we would win if a dispute came to blows. Knowing that, hostile leaders ought to postpone or foreswear their goals.

So Wittman and Luria are in good company when they warn about the possible repercussions of a lightweight U.S. Navy fleet. Ticonderogas boast the heftiest missile magazines in the surface force. Each cruiser packs 122 missile silos compared to 96 for an Arleigh Burke-class destroyer, the navy’s premier surface combatant for the foreseeable future. That amounts to over a one-fifth reduction in hitting power per vessel. But the overall reduction in fleet firepower figures to be worse than a one-to-one comparison between surface combatants suggests. It’s far from clear that the navy and the Pentagon will replace cruisers with destroyers on a one-to-one basis. In fact, the Biden administration’s first budget request, for fiscal year 2022, would condemn seven cruisers to the boneyard or shipbreaker while placing just one destroyer on order.

The nautical historian Julian Corbett might sound the alarm about the impact of hardware and budgets on U.S. grand strategy. Strategists normally limit war (and prewar plans for war) by “ends,” meaning the aims or goals they seek. Political and strategic ends govern how the leadership marshals and harnesses martial resources. The more ardently a competitor wants its goals, the more it invests to obtain them. The less it wants its goals, or the more modest those goals are, the less it invests.

That sounds simple if not banal, on the order of buy low, sell high.

But Corbett observes that it’s also possible to limit war by “means,” meaning how many resources the leadership is prepared to invest in an endeavor. This is the pathway less traveled. Corbett calls this method “war limited by contingent.” What on earth does that mean? In essence, a leadership that makes war by contingent decides how much it’s willing to spend on an enterprise in terms of lives, hardware, and treasure; allots the commander those resources; and instructs him or her to go forth and accomplish the maximum possible with them.

Corbett invokes the example of Lord Wellington, who led a modest land army ashore in Iberia in 1807 to battle Napoleonic forces in conjunction with Portuguese, and later Spanish, partisans. Supported from the sea by the Royal Navy, Wellington’s army made trouble for Napoleon as the opportunity arose. So bothersome were allied operations that Napoleon joked ruefully about his “Spanish Ulcer.”

The Iberian campaign was a successful deployment of war by contingent, but Corbett hastens to add that secondary operations around the periphery are valuable only insofar as they contribute to success in the main theater. Again, Wellington’s was a troublemaking strategy—a strategy of opportunism. Such strategies compel the foe to contest a secondary theater and sap the foe’s strength in the main theater. This makes sense for a sprawling contest of arms like the Napoleonic Wars.

But arbitrarily capping the resources allotted to top priorities would be nonsensical for Corbett. It would be tantamount to writing off important goals if they happened to cost more than the modest sum earmarked for acquiring them.

No. Prevailing in the principal theater or effort demands the classic approach whereby the ends sought dictate the means funneled into the effort. To wit, a contender’s society—people, government, military—must estimate how much its goals will cost. It either pays the price for them, or it balks. If the latter, it doesn’t treasure its goals enough to expend resources at the necessary rate, to sustain the expenditure for long enough to fulfill them, or both. In that case, the leadership should scale back its aspirations, or forego them altogether.

Take a simple analogy from private life. Suppose I need a car, and suppose I want one hot off the production line. But I let my means rather than my ends govern my shopping strategy. I declare that I will spend $10,000 on a shiny new set of wheels, and no more. That’s the war-by-contingent approach to car buying. How do you like my chances? They’re not so good given car prices. Now, if I let my goal drive the process, as strategic logic insists it should, I will discover that my new ride will cost me double that $10,000 if not more. At that point, I consult my finances. If I can, and want to, afford the expense, I head out to the dealership. If not, I embrace humbler aspirations. I buy used or take public transportation.

The latter is a far more rational approach than setting a fixed price and hoping the cost of my goal conforms to my spending preferences. Alas, Congress, presidential administrations, and the American people seem to have fallen into the former, strategy-by-contingent approach to top U.S. priorities. Each year Congress allots a fixed X number of dollars for defense, usually expressed as plus or minus a certain percentage of last year’s budget. Lawmakers then expect the Pentagon and armed forces to go forth and achieve a dizzying array of goals—even if the cost of those goals vastly exceeds X.

Far better to determine the cost of various defense goals ahead of time, whether it’s deterring China, Russia, or Iran, battling piracy in the Gulf of Aden or Gulf of Guinea, or finishing off ISIS; gauge whether X is enough to pay for all of them; rank them by priority if not; and either delay or forego lesser priorities or raise more resources until the ledger correlating ends with means comes into balance. Put strategy in charge, not budgeteering—and watch procurements of ships, planes, and armaments follow.