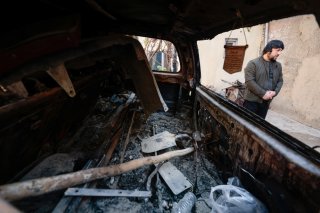 Following a successful Freedom of Information Act (FOIA) lawsuit by the New York Times, U.S. Central Command released a video showing its botched airstrike in Kabul during the U.S. withdrawal from Afghanistan in late August.

The airstrike took place on August 29, 2021, three days after militants from the Islamic State’s “Khorasan Province” (ISIS-K) launched a suicide attack against evacuating American forces at the Kabul airport that resulted in the deaths of thirteen U.S. service members and more than 150 Afghans. The reprisal strike was intended to target other members of the terror group. Instead, it killed ten Afghan civilians, including seven children.

The footage, recorded by a pair of MQ-9 Reaper drones, provided additional information to the public about the moments before the strike. In the video, a car backs in to park in a building’s courtyard in Kabul as several other unidentifiable figures walk nearby. After one person opens the car’s passenger door, it is struck by a missile, and the surrounding figures can be seen running from the explosion.

The U.S. military initially claimed that the strike successfully eliminated several ISIS-K operatives who were planning a second attack on the Kabul airport. However, reports circulated the following day that the strike had actually killed Zemari Ahmadi, a local employee of a U.S.-based non-governmental organization, and nine of his family members. Although additional information about Ahmadi and his family soon circulated in Western media, the Pentagon did not acknowledge its error until November. No U.S. troops were ultimately disciplined for the strike.

While U.S. military officials later noted that a child was seen in the area only two minutes before the strike took place, Air Force Inspector-General Lieutenant-General Sami Said stated that it was “100 percent not obvious” at the time.

“You have to be looking for it,” Said added, suggesting that hindsight had helped to illuminate the rushed decision-making that led to the botched strike. The general described the attack as an “honest mistake” rather than intentional negligence.

The U.S. government has offered a condolence payment to the Ahmadi family. It also indicated that it conducted an investigation into how the strike had been allowed to take place.