The Pentagon Is Thinking Big When It Comes to Hypersonic Missiles 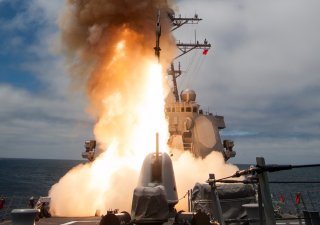 HUNTSVILLE, ALABAMA - The Navy’s Tomahawk missile has a two-way data link enabling it to re-route in flight as targets change. A maritime variant of the missile can adjust in flight to moving targets at sea. The Navy’s SM-6 missile is equipped with a dual-mode seeker allowing the weapon itself to send forward an electromagnetic ping, analyze the return, and adjust course as needed to destroy repositioning targets. Semi-active laser spots are regularly used to pinpoint moving targets with Hellfire missiles, artillery, and even air-dropped bombs. The Navy possesses missiles able to engage in precision targeting against moving targets, change course in flight, and hit more than one target with multiple re-entry vehicles in a single mission.

So what about Hypersonic weapons? U.S. hypersonic missiles are already firing and are soon to reach operational status. This is due in part to the massive push to accelerate tests and fast-track the technology in response to Russia and China. Hypersonic missiles are essentially here, so what about an ability to hit moving targets? Or an ability to hit multiple targets with several warheads loaded onto a single weapon?

Army weapons developers are trying to get in front of these challenges by building in a “tech insertion” possibility in its now developing hypersonic weapon, the Long Range Hypersonic Weapon.

“We have laid out priorities for near-term tech insertion. We plan to hold multiple targets at risk through communication with the weapon in flight and hit a moving or relocated target. We will also improve the warhead,” Robert Strider, Deputy at the Army Hypersonic Project Office, told an audience on August 11 at the Space and Missile Defense Symposium in Huntsville, Alabama.

How might this work? Establishing any kind of two-way data link with a weapon moving as fast as a hypersonic missile is likely to be quite difficult. At the same time, there may be evolving radio frequency data links or other high-speed transport layer technologies able to help a missile maneuver toward moving targets. One area of possibility lies in the prospect of software upgrades, as they can quickly improve weapons guidance systems and sensing functions without having to necessarily reconfigure hardware. This was the case with SM-6 and SM-3 missile upgrades as well as upgrades to fighter-jet launched air-to-air and air-to-ground weapons used by the F-22, such as the AIM-9X and AIM-120D.

Then there is also the question of autonomy or semi-autonomy. Weapons such as the air-launched Long-Range Anti-Ship missile are described as semi-autonomous, meaning they have built-in sensing technology coupled with an ability to discern new targets and self-correct to a degree. It certainly seems feasible that a hypersonic missile could be built with this kind of technology, yet it might need to operate differently given the speed and flight trajectory of hypersonic weapons. At the same time, computer processing speed can perform millions of functions per second, so data analysis could in theory be performed rather quickly should new information require a change in flight path. Networking could also play a major role, as perhaps a drone, surface ship, ground control station or even satellite could send new targeting specifics to the weapon in a matter of seconds.  For instance, the Air Force even has a “collaborative bomb” technology through which bombs in flight can share data, course correct, and discern new targets without needing human intervention.

This is a key reason why so many weapons developers use the term “open architecture,” an often-used phrase referring to efforts to architect a given platform with standard internet protocols, interfaces, and a technical infrastructure such that it can quickly accommodate new technologies and upgrades as they arrive.