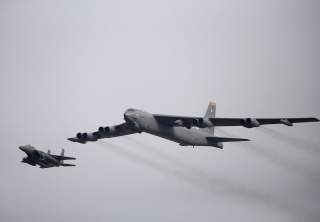 Sometimes, a moment is so ironic that it makes you stop for a minute to wonder who is running this universe. A classic example from the annals of U.S. military history: The first atomic bomb dropped on Japan was named "Little Boy," and the B-29 that carried it was named for the pilot's mother.

A far less historic but equally strange event took place on Thursday when Acting Defense Secretary Patrick Shanahan acknowledged that the Pentagon is considering a request from the head of U.S. Central Command, Marine Gen. Kenneth McKenzie Jr., to deploy more U.S. troops to the Middle East in response to purported threats from Iran.

"What we're looking at is: Are there things we can do to enhance force protection in the Middle East," Shanahan told reporters at the Pentagon. "It may involve sending additional troops."

That may not sound ironic at all until you realize that Shanahan was about to have a meeting with an official from Vietnam, home of the conflict that proved big things have small beginnings.

The ghost of the Vietnam War has hovered above Washington, D.C., since May 5, when White House National Security Advisor Ambassador John Bolton first announced an aircraft carrier strike group and bombers were headed to the Middle East "to send a clear and unmistakable message to the Iranian regime that any attack on United States interests or on those of our allies will be met with unrelenting force."

In response, Marine veteran Rep. Seth Moulton (D-Mass.) recently told Task & Purpose he was concerned about a Gulf of Tonkin-like incident between U.S. and Iranian forces that could lead to outright war. And while your humble Pentagon correspondent was considering asking Shanahan if he too was concerned about a sequel to the Gulf of Tonkin until he noticed the flag of the unified, communist Vietnam fluttering in the breeze (Subtext had clearly become text, like when Doogie Howser wore an SS uniform at the end of "Starship Troopers").

For all those beloved leaders who were born after the 1980s and did not have the benefit of learning about Vietnam from popular culture (such as the short-lived cartoon show "Rambo: The Force of Freedom") let me sum up why this discussion is relevant to current events in Iran: the Vietnam War was the result of a series of strategic failures that the United States repeated in Iraq and Afghanistan — and looks bound to repeat with regards to Iran.

While it's not an exact parallel, the U.S. military's buildup in Vietnam began in earnest following two reported attacks (although one was probably imagined) against U.S. warships in the Gulf of Tonkin in August 1964. That year, there were roughly 20,000 U.S. troops in South Vietnam. Four years later, more than 500,000 GIs were in country.

But the communists didn't have to win on the battlefield. They just had to outlast the United States, which they did – just like the Taliban have been able to do. And the U.S. military's tactical victories in Vietnam couldn't change the underlying cause for the war, namely the communists' goal of uniting the country under their rule. In Iraq, the Shiite government has made little to no effort to reconcile with Sunnis, guaranteeing a perpetual insurgency.

The Forever Wars have reminded us of the Vietnam-era lesson that decisions about when the United States should go to war, how many troops should be sent to the fight, and what would constitute victory are vexingly complicated. When U.S. civilian and military leaders have no answers, their response is to muddle along in the hopes that a magical "political solution" will save the day – such as the communists and Taliban renouncing violence and joining a pluralistic, democratic government.

In other words, Vietnam, Iraq, and Afghanistan all show that you can't improvise your way to victory.

With Iran, top U.S. civilian leaders appear to be incrementally escalating the military's footprint in the Middle East. The problem is the Iranians can react by moving their forces in the region too. Then we react to their reaction. Then they counter our reaction and so forth. (This is how a nuclear reaction starts. It ends with a mushroom cloud.)

On Thursday, Shanahan declined to comment on how many more troops McKenzie has requested in response to threats posed by Iran and its proxy forces.

"You know, what you may find is that we're conservative," he added. "More protection is better than less protection, so that's really been the nature of the dialogue."

On Friday, defense officials announced the Pentagon has approved sending roughly 900 additional troops to the Middle East and extending about 600 service members already there.

"We will of course continue to monitor the threat, and we continue to monitor the needs of our forces in the – in theater," Katie Wheelbarger, acting assistant defense secretary for international security affairs, told reporters at a news briefing. "And if additional assets or capabilities are needed to ensure their protection, we will evaluate that at the time based on the threat stream as we see it."

It's still possible that Trump will end the escalatory cycle to avoid a war with Iran. He has voiced deep skepticism about what the United States has accomplished in the post 9/11 wars and has repeatedly vowed to bring U.S. troops home.

On Thursday, Trump told reporters before meeting with Shanahan that he did not see the need to send reinforcements to the Middle East: "But if we need it, we'll be there in whatever numbers we need"

It should be remembered that Vietnam was a war that President Lyndon Johnson did not want to fight. When he announced he was sending 50,000 more troops to Vietnam in 1965, Johnson framed his decision in terms of responding to a request from the U.S. military commander Army Gen. William Westmoreland for more forces in response to increasing communist attacks.

"I have asked the commanding general, Gen. Westmoreland, what more he needs to meet this mounting aggression," Johnson said on July 28, 1965. "He has told me and we will meet his needs."