The Pentagon's Plan For Mobile Nuclear Reactors Is A Horrible Idea 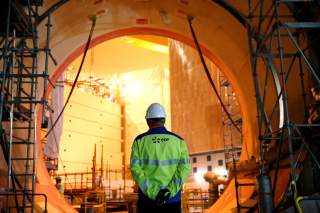 Key point: There are a lot of risks to public safety from this plan.

The goal is to provide reliable electrical power to remote forward operating bases and during quick-response humanitarian missions. But the project also raises questions of nuclear security and keeping atomic materials from falling into the wrong hands.

On January 18, the Pentagon published a Request for Information on the feasibility of developing a portable nuclear reactor in support of a program known as “Project Dilithium.” The reactor is in response to a 2016 Defense Science Board report that found that fuel and water accounted for as much as 90 percent of supplies sent to outposts in Iraq and Afghanistan, which in turn exposed U.S. truck convoys to ambush (air-dropped fuel cost as much as $400 per gallon).

With power use only likely to grow with the advent of power-hungry systems such as high-energy lasers to shoot down missiles and drones, the report recommended nuclear power as a solution, with “the need and benefit outweighing the difficulty in achieving nearly limitless energy on the battlefield.”

In its RFI, the Pentagon’s Strategic Capabilities Office extolled the virtues of a mobile reactor for both overseas and domestic use. “Small mobile nuclear reactors can make the DOD’s domestic infrastructure resilient to an electrical grid attack and fundamentally change the logistics of forward operating bases, both by making more energy available and by drastically simplifying the complex fuel logistical lines which currently support existing power generators operating mostly on diesel fuel. Additionally, a small mobile nuclear reactor would enable a more rapid response during Humanitarian Assistance and Disaster Relief (HADR) operations. Small mobile nuclear reactors have the potential to be an across-the-board strategic game changer for the DOD by saving lives, saving money, and giving soldiers in the field a prime power source with increased flexibility and functionality.”

The reactor should be able to supply 1 to 10 megawatts of power at least three years without refueling. It should weigh “less than 40 tons total weight, sized for transportability by truck, ship, and C-17 aircraft,” and be passively cooled by ambient air.

Given that a mobile reactor is likely to generate as much controversy as electricity, the military wants an “inherently safe design, ensuring that a meltdown is physically impossible in various complete failure scenarios such as loss of power/cooling.”

There should also be “no net increase in risk to public safety by either direct radiation from operation or contamination with breach of primary core. Minimized consequences to nearby personnel in case of adversary attack.”