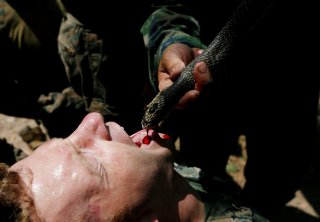 Since it was founded on November 10, 1775, the United States Marines Corps has faced a variety of threats and foes – and the latest is the animal rights group PETA (People for the Ethical Treatment of Animals), which sent a letter to Marine Commandant General David H. Berger in which it denounced the "crude killing of animals during the annual Cobra Gold 2020 military exercise."

Cobra Gold, which is one of the largest and longest-running international military exercises, is held each February in Thailand and this year marked its 39th year. It included participants from 29 nations including Thailand and the United States, as well as Japan, Indonesia, Malaysia, South Korea and Singapore. More than 5,500 U.S. military personnel reportedly took part in the most recent Cobra Gold exercises, which featured components on cybersecurity, amphibious assault, combined arms live-fire and humanitarian assistance.

However, one small portion of the exercise has garnered the wrath of PETA. This was the training exercise on jungle survival, during which soldiers were taught skills in the capturing and killing of animals for food while in the wild. This includes sessions on how to drink the blood of a snake, eat a scorpion or kill a chicken.

Photos of the Marines drinking the blood were widely circulated online and caught PETA's attention.

In the letter to General Berg, Shalin G. Gala, vice president of international laboratory methods at PETA wrote, "Clearly, there are precedents for troops to learn food procurement survival skills without having to use live animals in abhorrent training drills." On its website, PETA chronicled the event, and noted, "The scenes are almost frat party–esque, with some Marines celebrating and cheering one another on. Others apparently whipped out their phones to record the killings."

The animal rights group also noted that attendees of the training session were also trained to use jungle vines as a water source and how to recognize edible plants. Along with those photos of the Marines drinking the blood of the king cobra snake, there were other photos showing members of the 1st Battalion, 5th marines eating coconuts and other fruit, as well as U.S. Marines watching a Royal Thai Marine dig into a pineapple with his teeth to stay hydrated.

This is not the first time the animal rights group, which was found in 1980 in Rockville, Maryland, has done battle with the U.S. military. In 1993 PETA called upon the U.S. Army's Dugway Proving Ground to stop using live animals in survival training and that resulted in the Army canceling that portion of the training program. It engaged the USMC in 2011 when the group also convinced the Marine Corps Mountain Warfare Training Center to suspend the use of live animals in that training course.

In 2016, PETA exposed a U.S. Air Force Academy program that taught the "beating, killing, skinning, dismembering and cooking of rabbits." As a result of those efforts, the USAFA ended that practice.

The USMC has not responded to PETA's letter at the time of publication.