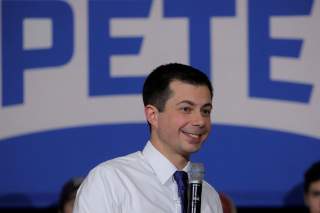 In 2016, I was quoted by the Washington Post’s E.J. Dionne as calling Marco Rubio “the Republican Obama.” I was wrong.

I was taken in by Rubio’s pseudo-inspirational language about bringing together diverse groups of people, expanding the base of the Republican Party, and pursuing an agenda for tomorrow, not yesterday.

I was not the only one to be so fooled. Jeremy Peters of the New York Times wrote an article with that theme. But what seemed like an optimistic vision and eloquence on first hearing was soon revealed to be a deliberate political strategy masking a shallow political philosophy and lack of character.

While I may not be the best at spotting the “next Obama,” I can say now that I am an expert at identifying wanna-be Obamas. And former South Bend Mayor Pete Buttigieg is a grade-A specimen. In fact, you could even call him the Democratic Marco Rubio.

In fact, his flowery language, above-average eloquence, and cliche-laden debate stage speeches about bringing the country together have also won him some Obama comparisons. CNN’s Van Jones says he’s capable of producing “Obama-level poetry.” But the more you listen to him, the more predictable and dull his speeches become.

No matter what the topic, Pete talks in a modulated tone about uniting the country with policies calculated to appeal to Goldilocks—not too “neo-liberal,” not too “socialist.” He attacked Sens. Sanders and Warren for “beating people over the head” if you’re not on their side “100 percent of the time.” He talked instead about winning “future former Republicans,” through “a politics of addition and inclusion and belonging.”

Like Rubio, he robotically repeats a lot of the same lines over and over again. He repeated “turn the page” half a dozen times in the New Hampshire debate. Rubio liked to say, “Yesterday is over.” Pete said, “We can’t wait,” to Beto O’Rourke four times in the span of six sentences on gun control.

Pete even sounds like he cribbed much of his “inspiring” language from Marco.

Here’s Marco Rubio decrying a bill to help clean up the BP oil spill for being too expensive: "This is no longer a Gulf Coast restoration bill, it’s a federal power grab that exploits the BP spill to pay for special interest projects driven by the usual 'what's in it for me' Washington mentality.”

Here’s Pete Buttigieg decrying Elizabeth Warren’s healthcare plan for being too expensive: “We’ve got to move past the Washington mentality that suggests that the bigness of plans only consists of the trillions of dollars that they put through the Treasury.”

When you get right down to it, what do any of Pete’s vaguer-than-thou bromides really mean? Nothing.

Every single candidate who has ever run for president—or any other major position, for that matter—has said that they would be the one to shake things up. They are not from Washington. They are all going to “change,” “build a bridge to the 21st century,” bring out hope, and prove that “love trumps hate.” And nothing ever changes, because, first of all, everyone is bsing about their own abilities, and secondly, the mechanisms in place, combined with human nature, dictate that politics is, many times, a corrupt and intractable process.

Pete is no different from the rest of them, except that maybe he is a bit more arrogant and has a lot less experience or qualifications. He’s covering for his lack of substance with style, trying to make people think he’s the more erudite person in the room.

He clearly thinks he is someone special. On Real Time with Bill Maher in May, he said, “People are looking for something completely different. … And you could argue, in many ways, that it doesn’t get more different from this president than a laid-back, young, gay, intellectual mayor from the Midwest.”

Yes, he’s a very smart little boy for having graduated from Harvard. One of his opponents, Sen. Warren, was actually a professor at Harvard. He was a Rhodes scholar! So was Sen. Cory Booker. He won elections in a small, liberal college town with 70-80 percent of the vote! So did his two predecessors, South Bend Mayors Joe Kernan and Steve Luecke.

In New Hampshire, he said, “We cannot have a vision that says, ‘back to normal.’” A 38-year-old Harvard graduate who went straight to work as a consultant at McKinsey and projects an image as somebody who has an answer to any question is the most normal person in politics ever. There are hundreds of people in each policy school on the East Coast just like him. There are hundreds upon hundreds of people in D.C., working at think tanks, lobbying firms, in the bureaucracy of “the blob” just like him. The only difference is, some of those people have actually done things.

“We have to meet this moment,” he said to Biden at the New Hampshire debate, and we can’t go back to “the politics of the past.” How is Buttigieg any different from Hillary Clinton, who also prided herself on having an answer for everything but was viewed as being too buttoned-up and inauthentic, except in his absolute lack of experience?

He’s not any more authentic than Hillary. He lacks a sense of humor, never raises his voice, and rarely offers a surprising answer to a question or veers away from discussion of policy and politics. He is the insufferable freshman giving his ideas about how he can change society in the dorm room common’s area.

2020 is going to be an expand the base election. Trump’s approval and disapproval numbers are set in stone. No Republican-leaner who has stayed with Trump through the 2016 election, impeachment, and all the rest, is going to be leaving him for someone who proposes a healthcare plan to the left of Obama’s. And progressives hate Pete more than anyone else, largely for justified reasons. He’s certainly not going to excite black voters, with whom he polls abysmally.

Analyzing why Pete is disliked frequently goes back to his smugness, his goody-two-shoes persona, his vacuousness and lack of authenticity, and how insufferably boring he is. Some critics have decried that politics today is all about excitement and style. But style is all Pete has. He has volunteered for state-level political campaigns, not run them. He was a young guy at McKinsey—and he won’t even talk about his experiences there or release his records—not the founder and CEO of a Bloomberg-esque international company.

The reason people support him is just that they like how he talks. So if you consider how his speaking abilities are really overrated—that he’s really the state runner up at the speech and debate finals, not the national champion—and how empty his words really are, Pete is left with nothing.

Exposed by Sen. Klobuchar on stage before New Hampshire, what, at all, distinguishes him from Sen. Rubio? At least Rubio could go back to his position in the Senate. Ouch.