Pete Buttigieg Is Reviving the Pragmatic, Progressive Ideals of the Social Gospel Movement 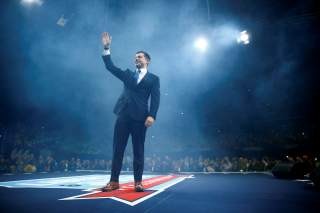 One late October poll of Iowa Democratic caucus-goers, the first voters to weigh in on the party’s 2020 nominee, showed the South Bend, Indiana, mayor in third place. He trailed front-runners Joe Biden and Elizabeth Warren but had surpassed Bernie Sanders. Other polls have shown a similar rise in support for Buttigieg.

At age 37, he is considerably younger than his leading rivals. Buttigieg appeals to the many Iowa voters who are seeking, in the words of pollster Ann Selzer, a “new generation of leadership.” He has also drawn the support of many centrist Democrats, especially with his criticism of Warren’s Medicare for All plan to provide government-paid health care for all Americans.

As a historian of religion, I believe that Buttigieg’s popularity also stems from another source: his linking of faith to his political positions. In interviews, Buttigieg has said that “Christian faith” can lead one “in a progressive direction.” He has also said that Christianity teaches “skepticism of the wealthy and the powerful and the established.”

With these arguments, Buttigieg has tapped into a tradition of religious liberalism that once flourished in the American Midwest.

Focus on Improving the World

Much of my scholarship examines the vibrant period for religious liberalism of the early 1900s. In this era, Midwestern states were at the center of a movement – the Social Gospel movement – that linked Christianity with progressive politics.

The movement gained wide popularity in American Protestantism at the beginning of the 20th century. Its proponents proclaimed the need to improve the world rather than focusing on being saved in the next life – a common message espoused in most U.S. churches.

One exemplar of the Midwestern roots of the Social Gospel was the Methodist clergyman Francis J. McConnell, who became known as an advocate for progressive policies.

McConnell grew up in a small town in Ohio before attending Ohio Wesleyan University. From 1909 to 1912, he served as president of DePauw University in central Indiana.

While there, McConnell published a book arguing, as Buttigieg does today, that faith should inspire social action. He wrote that “moral impulse calls for the betterment of all the conditions of human living.”

In this way, McConnell “participated in the promotion of an evolving welfare state,” according to historian Susan Curtis.

Other prominent Social Gospel proponents lived and worked across the American Midwest at the time. From his Columbus, Ohio, church, pastor Washington Gladden became famous for urging greater protection for workers and the poor. Farther west, in Kansas, the Congregationalist minister Charles Sheldon urged Christians in his 1896 book, “In His Steps,” to improve the lives of those around them.

At the time, small cities and towns in the Midwest were the heartland of the Social Gospel.

Leaders of the movement sought to apply Christian principles to daily life. They focused particularly on economic issues, and advocated for better conditions for workers and greater government oversight of business.

The movement emerged in response to the development of massive national corporations in the U.S. in the late 19th century. These companies consolidated wealth and power in large cities, often quite distant from Midwestern communities.

Demands for a social safety net for workers were rising in places like Columbus and Indianapolis as much as in larger metropolises like New York or Philadelphia.

These leaders urged the creation of a social safety net to provide a living wage for all workers. They also advocated increased government oversight of corporations, which they believed had grown too large. At a time when many churches supported big business, this was a controversial position.

Lecturing back in his home state of Ohio in 1912, McConnell likened modern “corporate kings” to the absolute monarchs of previous centuries. Corporate titans exerted great power at a distance and could inflict harm.

Not Radical, But Pragmatic

While some Social Gospel movement leaders on the East Coast openly advocated socialism, their Midwestern counterparts tended to be more restrained in their proposals. The Social Gospel in the Midwest had a pragmatic nature.

People like McConnell objected to socialist proposals such as government ownership of industry, suggesting that such solutions were impractical. Noting that Americans are “on the whole conservative,” McConnell saw little hope for those who desired “any radically changed social system.” A better solution, in his view, was an improved social safety net and efforts to reform the excesses of capitalism.

Pete Buttigieg’s emphasis on policies that appeal to centrists rather than liberal positions reflects this pragmatic tradition.

He has echoed previous generations of religious liberals in that his Christian beliefs make him skeptical of concentrated corporate wealth. But his advocacy of a gradual approach to issues like expanding medicare and breaking up major technology firms places him firmly in the midwestern tradition of the Social Gospel.

This piece incorporates material from an article published on April 17, 2019.