This Picture Could Be America's Next Armored Vehicle (Or Not) 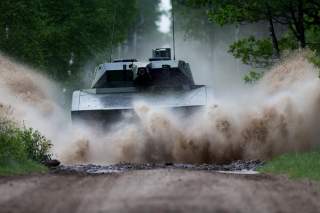 First, there was the Future Combat System project, conceived in 1999 and canceled in 2009 at a cost of $21 billion. The Ground Combat Vehicle program was launched in 2009 and terminated in 2014, after wasting $1.5 billion. Both programs suffered immature technologies, unrealistic requirements and botched management.

Now comes the Optionally Manned Fighting Vehicle (OMFV) program, which aims to develop a Bradley replacement that can be crewed or remotely controlled, as well as the robot ground vehicles that will be the OMFV’s scouts and escorts.

Which leads to the question: if the first two M-2 successor programs failed, why should we expect the third to succeed?

That’s what the Congressional Research Service (CRS), Congress’s research arm, wants to know. “The OMFV is expected to be the Army’s third attempt to replace the M-2 Bradley IFV after two costly previous attempts were cancelled, perhaps casting doubt on the Army’s ability to design and field major ground combat systems,” CRS notes in a new report.

A new CRS report urges Congress to ask some tough question about the OMFV. For starters, why will this project end any better than its abortive predecessors? The new Army Futures Command, a major organization tasked with developing new technologies, will oversee the process. But who exactly will have input into the requirements for OMFV, and who will make the final decision on which requirements to use? Which Pentagon agencies will have a role?

Interestingly, CRS suggests that the Achilles heel of the OPMV might not be the vehicle itself, but its accompanying robots. The Army wants light, medium and heavy Robotic Combat Vehicles from ten to thirty tons and armed with anti-tank missiles and cannon (a conceptual drawing of a heavy RCV resembles a main battle tank, complete with turret and treads).

While armies have been designing manned armored vehicles for a century, robot tanks are a different matter, especially when it comes to issues of autonomy and fears of “killer robots” running amok. “While the OMFV appears to offer a significant improvement over the M-2 Bradley—given weapon systems technological advances by potential adversaries—operating alone without accompanying RCVs, the OMFV may offer little or marginal operational improvement over the M-2 Bradley,” CRS warns.

“Given technological challenges, particularly autonomous ground navigation and artificial intelligence improvement, the Army’s vision for RCV may not be achievable by the planned FY2026 fielding date or for many years thereafter,” said CRS.

There is no doubt that the U.S. Army’s Cold War armored mainstays—the M-1 Abrams tank and the M-2 Bradley—need to be replaced. They are early 1980s designs that have performed well and have aged well, with numerous upgrades to their firepower, sensors and protection. But as with jet fighters, only so many new technologies can be retrofitted onto old platforms. At some point, to take advantage of advances such as lightweight armor plate, automation and stealth, new vehicles must be fielded.

But as CRS rightly points out, given the debacle of the Army’s most recent armored vehicle projects, Congress and the taxpayer need to keep an eye on these programs.