This Picture Could be the Hypersonic Future of the U.S. Air Force 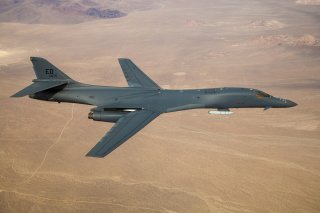 The U.S. Air Force’s decades-old, combat-tested B-1B Lancer aircraft has just taken a huge step toward developing an ability to fire hypersonic weapons in flight, as the Air Force has released images of the aircraft flying at Edwards Air Force Base in California with a missile loaded underneath the fuselage on an external pylon.

The photo, released by the Air Force in November of this year, has generated a massive amount of attention in light of the fact that it may represent a sizable leap forward toward actually deploying a hypersonic-missile armed B-1.

The Lancer was armed with a Joint Air-to-Surface Standoff Missile mounted under an external pylon, the service said in a news release.

“Adapting a small number of our healthiest B-1s to carry hypersonic weapons is vital to bridge between the bomber force we have today, to the force of tomorrow,” Gen. Tim Ray, head of the Air Force Global Strike Command, said according to the release.

Interestingly, the development appears to build upon previous Air Force work to develop a mock-up B-1B weapons bay, showing that the aircraft can carry as many as four hypersonic weapons internally.

At the time, Ray went on to explain that the service was interested in developing both external hardpoints on the B-1B as well as an extended bomb-bay.  He also made a comment which in retrospect seems to have anticipated the Air Force’s recent carriage flight with a JASSM, as he mentioned that the “the external hardpoints can carry the smaller hypersonics along with JASSM (Joint Air to Surface Standoff Missile, JASSM ER(extended range) and LRASM(Long Range Anti-Ship Missile). You can see a greater versatility for that aircraft configuration.”

The demo referred to by Ray also demonstrated that the bomb-carrying capacity of the B-1B can increase from 24-internally carried weapons all the way up to 40, according to a 2019 Air Force report.

The demo showed that the B1-Bs magazine capacity can be increased from 24 weapons internally, all the way up to 40,

“This gets the B-1 into the larger weapons, the 5,000 pounders. It gets it into the hypersonics game as well,”  Lt. Col. Dominic Ross, B-1B program element monitor, AFGSC, (Air Force Global Strike Command) said in an Air Force Report.

Accommodating larger hypersonic weapons into a B1 bomb-bay brings a number of strategic implications; not only does it massively increase the target envelope and range but also allows for longer mission “dwell” time over targets to sustain attacks. Also, in an age where modern air defenses operate with much greater range, scope and precision when compared with years past, arming a B-1 with hypersonics introduces an entirely new sphere of high-speed standoff attack.