This Picture Could Be NATO's Worst Nightmare Come True 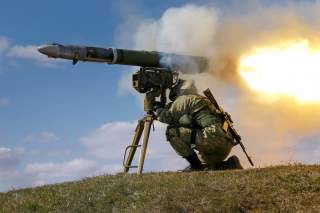 The modern anti-tank guided missile can hit a target several meters in diameter at ranges greater than five kilometers. While this level of precision is normally used to disable tanks, resourceful operators have often found the precise nature of ATGMs makes them useful for many other targets including infantry and even other ATGM teams. This has been especially notable during the Syrian Civil War, with the Free Syrian Army and Syrian Arab Army sometimes engaging in ATGM duels.

However, the High Explosive Anti-Tank (HEAT) warheads on most ATGMs are poorly suited to this kind of combat. While the heavy weight of some HEAT warheads may give them significant blast or fragmentation effect, the majority of explosive effect is focused on creating a hot jet of metal to penetrate armor.

Dedicated thermobaric or fragmentation warheads are more effective against infantry and structures as their explosive force is all projected outwards. They also can fit more explosives into the space given to them, as HEAT warheads have to have an empty conical or spherical portion that “focuses” the explosion into a jet. Fragmentation and thermobaric warheads fill that empty space with more explosives. The downside to these warheads is that they make the missile ineffective against heavy armor.

Russia appears to be ahead of the curve on offering fragmentation and thermobaric warheads for its anti-tank guided missiles as practically every missile in its inventory has variants with these warheads. But how effective are these weapons? Who uses them? Could they prove a viable alternative for other infantry arms like sniper rifles or conventional artillery or direct fire guns?

One of the most mainstream uses of high explosive anti-tank guided missiles is as a way to deliver precision anti-infantry or anti-structure firepower from a helicopter. Russia accomplishes this with the 9M120F missile, a version of the 9M120 “Ataka” anti-armor missile. The first combat use of the Ka-50 attack helicopter occurred in 2016 when 9M120Fs and unguided rockets were used by the Russian Air Force to destroy some opposition forces in Syria.

The United States also fields a version of an anti-armor missile optimized for blast effect in the AGM-114N Hellfire II missile, which uses a metal-augmented charge warhead to increase the lethal radius of the missile’s explosion.

In contrast, almost every Russian ATGM in current service features a high explosive or fragmentation variant. From the super-heavy vehicle mounted 9M120F “Ataka” missile (that also is employed on a ground ATGM carrier, the 9K132 Shturm-SM), to lightweight man portable 9M131F “Metis-M” missile, thermobaric or fragmentation versions exist of almost every single ATGM in Russian service.

These variants have seen service in conflict zones. Notably, 9M113F-1 thermobaric missiles for the Kornet ATGM system have been fired at Ukranian positions in the Donbass. Other 9M113Fs have turned up in Sudan. These represent a highly dangerous capability for those who wield these missiles.

Kornets are already notorious for being one of the most powerful and precise anti-armor missiles, having penetrated Israeli Merkava tanks. Thermobaric missiles give the same teams an incredible anti-infantry and anti-structure capability The 9M113F-1 thermobaric ATGM is said to have an equivalent HE effect of ten kilograms of TNT, the same explosive content as a 155-millimeter artillery shell. The lighter 9M131F missile shot by the Metis-M ATGM system has an equivalent HE effect of five kilograms, lighter but still double that of a 105-millimeter artillery shell.

Combined with the observational capabilities of the Kornet launcher (12-20x zoom and thermals), thermobaric missiles make it a potent anti-access/area denial (A2/AD) tool against infantry. Western strategists have been concerned about the usage of super-long range sniper rifles in this role, but thermobaric ATGMs are another tool that could accomplish this mission.

In contrast to sniper rifles, the guided nature of a thermobaric ATGM would require less training to utilize and make super-long range shots easier. The maximum range of a Kornet is far beyond the longest sniper shot ever taken at 5.5 kilometers (for the man portable system), although the smaller Metis-M can only go out to two kilometers. An infantry unit being engaged by thermobaric ATGMs at five kilometers would have a very hard time determining where the shots were coming from, as they usually lack laser warning receivers or other advanced equipment tanks have to locate ATGM launches.

The tradeoff is that an ATGM position will have a greater firing signature and less stealth than a sniper team, although this is less of an issue when defending a prepared position. Both the Kornet and Metis-M systems are fairly mobile, they can be transported in small teams of two to three men as required, so they can function as a precision weapon on the offense if necessary.

In comparison to laser-guided artillery systems, they are faster and easier for unorganized groups such as militias and insurgent groups to put into action. Laser-guided artillery is roughly as precise, but requires expensive laser-designation equipment and trained soldiers and command infrastructure to successfully link the shells to the designating troops on the ground.

Of course, the biggest issue with these missiles is the cost. ATGMs cost far more than an artillery round or sniper-rifle munitions. But the cost is a non-factor for some state actors who may provide these kinds of missiles to possibly attack U.S. forces. Notably, Iran has been spotted providing its own copy of the 9M113F thermobaric ATGM to Shiite militias in Iraq.