This Picture Is the U.S. Military's Worst China Nightmare (Thanks to Russia) 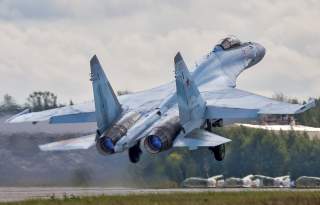 Key Point: The Sukhoi Su-35 Flanker-E has entered service with the People’s Liberation Army Air Force (PLAAF) according to the Chinese Ministry of Defense last year. The advanced Russian-built fourth generation fighter is a significant boost to the PLAAF and could be used to good effect by Beijing in over the South China Sea.

“The Su-35 is a multi-purpose fighter jet capable of air combat and precision strike against land and surface targets,” Senior Colonel Wu Qian, Director General of the Information Office of China's Ministry of National Defense, said during a April 26, 2018 press conference. “Currently, the aviation troop units of the PLA Air Force have been armed with the Su-35 fighters.”