A Pilot's Incredible Tale of the Iran-Iraq War 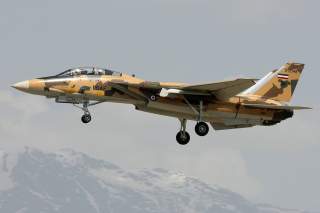 Our aeroplanes were only armed with AIM-7s and AIM-9s, so we came in really close. I fired one AIM-9 at very close range, and when my missile hit the MiG, it blew up into a massive fireball almost immediately – I could not avoid the explosion.

However, as told by Tom Cooper and Farzad Bishop in their book Iranian F-14 Tomcat units in combat, the F-14’s service in Iran is characterised by an implausible series of controversies and ‘educated guesstimates’ that are completely wrong.

In fact at the time of the Iraqi invasion in 1980, the Tomcat force effectively bore the brunt of active air defence operations against thousands of Iraqi air strikes. Indeed, F-14 crews fought more aerial engagements than the U.S. Air Force and the U.S. Navy combined during the Vietnam War, scoring a similar number of aerial victories.

Hazin, later a lieutenant general, recalled what happened during the short air battle which ensued; ‘We closed on the Iraqi MiG-21s undetected. Our aeroplanes were only armed with AIM-7s and AIM-9s, so we came in really close. I fired one AIM-9 at very close range, and when my missile hit the MiG, it blew up into a massive fireball almost immediately – I could not avoid the explosion. Parts of the disintegrating MiG-21 hit the left wing of my aircraft and were then ingested into the left engine.

‘Fire warnings were blinking all around the cockpit. I lost power in that engine, and when I looked to the left I also realised that the AIM-7 and AIM-9 that had been mounted on the port wing shoulder pylon had been ripped away. The shoot from the explosion of the MiG enveloped my jet as it passed through the fireball.

‘There were two other Iraqi MiGs nearby, but they dropped their bombs and turned back to Iraq, leaving their squadronmates to their fate. This was most fortunate for us, as I had great problems with the controls and the speed of my Tomcat. Capt Akhbari suggested we land at Ahwaz or Dezful, but I refused to do so. Both of these airfields could soon fall to the Iraqi Army, and I was not going to be responsible for handing an IRIAF F-14A to the enemy. So we decided to return to Khatami, where the jet could either be repaired or used as a spares source. If that was not possible, we could abandon the aircraft and let it crash into the Iranian desert. Despite the jet having suffered severe damage, and being difficult to control, we managed to get it safely back to Khatami. The F-14 was later repaired and returned to service.’