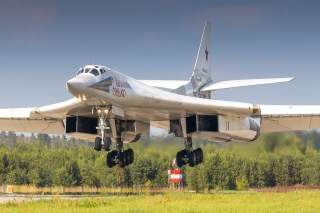 The Russian government has approved the development of a new heavy bomber. Now we wait.

The Kremlin inked a deal with Tupolev, a subsidiary of the United Aircraft Corporation, for design, construct and initial test of the PAK-DA bomber, Deputy Minister of Defense Alexey Krivoruchko announced in early March 2020.

“The characteristics of the aircraft were agreed upon, all contract documents necessary for the production of samples were signed, and preparatory design stages are underway,” Krivoruchko said.

Testing is scheduled to commence in 2027. The new bomber will replace the Russian air force’s venerable Tu-95 bombers, Krivoruchko said, according to Zvezda, a government-run media outlet.

But a lot can go wrong between now and 2027. With a mere $70-billion annual budget, a tenth what the United States spends on its own military, the Kremlin is trying to match many of the Pentagon’s major ship and plane programs.

In addition to the bomber, there’s a new stealth fighter. An armed wingman drone. An aircraft carrier. With the world economy teetering and oil prices plummeting, it’s not at all clear Russia can afford all the new weapons it wants.

“I think these systems will eventually be built and fielded,” Samuel Bendett, an analyst with the Center for a New American Security in Washington, D.C., told The National Interest. “This is now a matter of national pride for Russia.”

But how many of the new systems the Kremlin buys, and how quickly, are open questions. It’s not hard to imagine the PAK-DA program experiencing delays. “The eventual military acquisition date of 2027 may be pushed to the right,” Bendett said.

While work on PAK-DA begins, the Russian air force is investing heavily in upgrades for its existing Tu-95 and Tu-160 long-range bombers, which respectively date from the 1950s and ‘80s.

In 2015 the Russian defense ministry announced it would restart Tu-160 production and also modernize 16 existing bombers for a future fleet of 50 modernized Tu-160Ms and new-build Tu-160M2s.

The M-model Tu-160 features new engines and avionics and a metallic canopy treatment that reduces the type's radar-reflectivity.

Cost aside, it's not clear that Tu-160-builder Kazan can produce new bombers on schedule. The Kremlin launched the Tu-160M program before Kazan could finish modernizing its bomber factory, Starchak noted.

Having struggled for decades to keep fewer than 20 Tu-160s in the air, Russia could struggle to more than double the fleet.

The Tu-95 modernization effort is less ambitious. In 2018 the Kremlin launched an upgrade program for 20 of the air force’s 60 Tu-95s. The Tu-95MSM boasts new engines and avionics, potentially prolonging the service life of the type for several decades.

Incredibly, the Kremlin is already talking about a bomber type to succeed to the PAK-DA starting in the 2040s.

Lt. Gen. Sergey Kobylash, commander of long-range aviation for the Russian air force, announced the plan in an interview with newspaper Moskovsky Komsomolets.

"It is expected that by the year 2040 a sixth-generation strategic bomber will be created, which will already be unmanned," Kobylash said, according to one summary of the interview in TASS.

“The 20-year projection arc is meant to ‘buy time’ to figure out the most important technological issues with respect to this aircraft,” Bendett explained. The Russian aerospace industry cannot yet build a fully reliable and combat-capable large drone.

The U.S. Air Force also is developing a new strategic bomber. The B-21, which could fly for the first time as early as 2021, reportedly has a pilot-optional mode. With the flip of a few switches, it could transform into a long-range drone similar to the sixth-generation unmanned aerial vehicle the Kremlin hopes to deploy.