Poland’s Refugee Challenge Is Too Big to Handle Alone 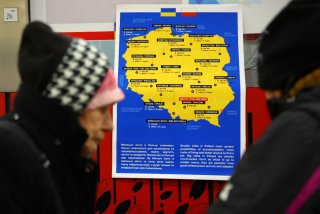 In the first half of March, the number of Ukrainian refugees crossing the border with Poland on a daily basis exceeded over 100,000 thousand, reaching a total of over 2 million as of the time of this writing. These refugees are made up only of women, children, and the elderly, as any Ukrainian man between the ages of eighteen and sixty is not allowed to leave the country. Poland, for its part, has implemented an entirely open-door policy to anyone escaping Russian bombings.

Though this generosity is unprecedented in Polish history, it is also unprecedently costly. Both Poland’s social structure and economy will soon face far-reaching challenges that may affect the country’s very stability.

Shortly after the start of Russia’s invasion, Polish prime minister Mateusz Morawiecki announced that no refugee would be denied entry to Poland. He even stated that passports were not essential to cross the border, and even pets would be welcomed in. The government’s pronouncements have been paired with an enormous engagement by ordinary Poles, who have turned out in massive numbers as volunteers to help refugees in various ways. Before the state could organize a centralized system of distributing refugees across the country, individuals, parishes, local governments, and NGOs had already arranged a wide support net, providing everything from free accommodation to bringing food supplies, clothes, medicaments, blankets, and psychological and legal aid.

Within a few days, border crossings saw kilometers-long car queues offering free transportation to major urban areas. Reception points were flooded with volunteers coming from all the country. Having personally volunteered myself, I can safely say that I have never before encountered such a wave of selfless goodwill, motivated solely by a desire to support neighbors in need.

Emotionality, however, must give way to rationality. Three weeks have passed since the beginning of invasion, and Polish cities’ capabilities have reached their limits. Although volunteers, border guards, the Territorial Defence Force, and number of local institutions have done an impeccable job in securing the inflow of refugees, Warsaw’s crisis management effort hasn’t kept up. Recent moves—establishing a centrally-coordinated relocation of refugees mission, organizing special trains and alternative transportation to the country’s western states, setting up a new coordination team in the Ministry of Infrastructure—will help in the short term. But with potentially another few million refugees to come, Poland will soon face enormous long-term challenges.

First and foremost, heaviest burden will be carried by Poland’s social system. Mothers with children, along with the elderly, will obviously need access to the country’s healthcare system, which was hit hard by the coronavirus pandemic. Without a significant increase in hospital budgets, many of them will not be able to take in that many additional patients. If more funds are made available through an increase in public debt and a second wave of “helicopter money” (i.e., unconventional monetary policies), something that was widely practiced during pandemic, it will accelerate existing inflation. This would cause significant social discontent, especially since Poland’s consumer price index (CPI) has already gone up by almost double-digit values. Moreover, the country’s central bank has just signaled that the banking system should be prepared for a possible 5 percent increase in interest rates—a move that would slow the economy, to say the least.

Ukrainian mothers, who must make a living, will need to enter the country’s labor market. This will trigger a need to invest in nurseries, kindergartens, and education system more broadly. Children from Ukraine obviously don’t speak Polish; engaging Ukrainian teachers, at least in short term, will hence be essential. The public transport system will need to adjust to the new reality and offer mobility to millions of new riders who have a low income, if any at all. On top of everything, the real estate market will face certain turmoil. The prices of apartment flats were already a major issue in public debates. The pandemic only sped up a spike in the cost of construction materials at time when many consumers moved their savings to the relatively safe and stable real estate market.

Among the challenges there are, however, relatively bright spots in this situation—it amounts to a short-term demand that could significantly boost long-term growth. While Warsaw noted a 9.2 percent average salary rise in January, and the unemployment rate has hit historic lows, in December 2021 the country’s parliament brought in a long-awaited reform bill regarding the employment of foreigner workers. In 2019, Poland was a global leader in terms of short-term immigration, and it smashes other European countries as the number one workplace for foreigners from outside of the EU. Since the beginning of this year, it has been much easier for Polish entrepreneurs to employ Ukrainians and allow them to prolong their stay in Poland. The reform was approved by all parties in both legislative chambers of parliament and has been widely applauded.

The Limits of Generosity

Although the refugees may help Poland tackle its demographic issues—the country has one of the lowest population growth rates across the EU—the fact remains that Poland’s economic and social system will need time, effort, and money to adapt to these new conditions. European support with regards to currently allocated funds—the €500 million that has been thus far promised is definitely not enough—and relocation efforts of Ukrainian refugees throughout the Union will be essential but won’t solve the overall issue. Polish citizens’ current enthusiasm will slowly fade away with time, and Polish society will have to find the balance between helping Ukrainian refugees and safeguarding its own welfare.

Though every state’s duty is to fairly support people in need, its foremost duty is always to its own citizens. Poles will soon be asked tough questions about what they can afford, what is the limit of their generosity, and whether the international community is providing sufficient aid given the burdens that Poland is being asked to bear.

Jacek Płaza is head of the foreign affairs editorial team at Jagiellonian Club, a Polish conservative think-tank. He is also an advisor at East Analytics, a consultancy.