Poland's Tried to 'Merge' Russian and NATO Tanks. How Did It Work Out? 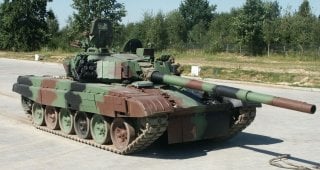