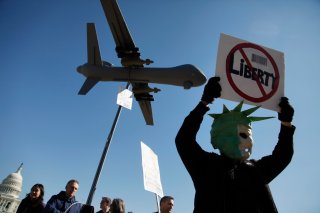 Big Brother learned how to watch you in Iraq and Afghanistan. With elections looming and public anger continuing to boil over on America's streets, high-tech surveillance tools perfected during the Global War on Terror are now being trained on our fellow citizens.

Recent reports reveal state and federal government agencies deployed manned aircraft and pilotless drones to track demonstrations in the wake of the police killing of George Floyd. Domestic espionage is nothing new; governments have always spied on their citizens. But how this can now be done is revolutionary and what new surveillance techniques can now elicit on behalf of politicians and public officials pose important challenges to democracy.

Spying is attractive as a force multiplier. Collecting information about one’s adversaries—real or imagined—allows an organization to conquer, occupy, and manage more with less, ensuring security assets go to where they are needed most. Governments or firms with strong intelligence collection capabilities can limit their costs, risks or increase their effective reach, even making archaic practices—like colonial conquest—more attractive.

The problem for governments over the last two centuries has been that the cost of repression has in many instances become prohibitive. Police and intelligence organizations staffed with a large number of personnel are expensive. It is cheaper in many cases to just let populations have their own way, including the public in politics and relying on citizens to self-report when they experience problems. The trade-off is that democratic leaders have less control. Still, liberalizing politics looks much more attractive when the cost of repression is prohibitive.

Geography and good fortune ensured the United States became one of the first, and longest-surviving large democracies. In the early colonial days of North America, people who objected to their government could simply leave, moving farther into the interior of the continent. European settlers were spread over such vast territories that it became impractical to govern them from England. After establishing preeminence in Europe, the British attempted to reign in the growing autonomy of their North American colonies by making deals with Native Americans to limit Western expansion by their Atlantic possessions and ultimately by co-opting native populations in a war against the colonial rebels.

What does all this have to do with drones? Unmanned Aerial Vehicles are part of a suite of technologies that vastly lower the cost of keeping tabs on people. UAVs and other platforms allow a small force to monitor and effectively interdict (attack) much larger groups. Politicians and the US military love drones because they make it possible to fight wars far from home without committing “boots on the ground,” thereby lowering the costs and risks associated with military adventures. The low “price point” of drone warfare means that it is a growth area in U.S. military operations, even while Americans are increasingly tired of endless foreign wars.

Now, the Global War on Terror and its drone warfare techniques are coming home to America. As with other methods of suppression and control the U.S. military was compelled to adopt to counter insurgents in Iraq and Afghanistan, drones are now being obtained by civilian law enforcement. Being cheap and effective, UAVs allow federal and state officials to keep tabs on much more territory, increasing the length of the long arm of the law. For the most part, these technologies are being used to help cops catch the “bad guys.” But as recent scrutiny of police abuses makes clear, the ability to monitor can quickly be turned into an increased tendency to repress.

Recall that the problem the British faced in North America was coverage; there was too much land and too few redcoats. London had to rely on legitimacy to govern—happy colonists, willing to help authorities repel the native population and keep tabs on a few local malcontents. When being governed from abroad stopped making sense to Americans, and the British refused to extend democracy to the colonists—“no taxation without representation”—the game was up.

Of course, King George could have just hired more soldiers to place their jackboots on colonial necks. He did recruit the hated German “Hessian” mercenaries when the supply of labor from British prisons ran out. But the cost was unsustainable. England racked up huge debts in its attempt to re-assert its authority over European North America. They were forced to admit defeat when creditors balked at making additional loans and it became clear that the value of the spoils from the New World could not possibly restock the coffers of the Bank of England.

Facing the same coverage problem as the British, and with far fewer financial resources, the new American nation defaulted to democracy. Today, however, we have the first inklings of a cost-cutting solution to the coverage problem. Quality intelligence can be collected on a large number of people cheaply, allowing government officials to increase their control over citizens.

Cheap intelligence is just one factor eroding democracy. Many will note that we have laws in America and a culture that cherishes liberty. But experience has shown that legal protections are weak protection against a government with the means and the will to repress. Incumbent leaders do not necessarily prize your freedom more than their longevity in office. Technological innovations, begun as part of the Global War on Terror, make it cheaper to govern autocratically. China is already applying these technologies to repress the Uyghur minority in Xinjiang. Those who value freedom must carefully scrutinize the surveillance capabilities of the state.

Erik Gartzke is Professor of Political Science and Director of the Center for Peace and Security Studies (cPASS) at the University of California, San Diego, where he has been a member of the research faculty since 2007. He has written on cyberwar, trade and conflict, and the effects of economic development, system structure and climate change on war. Dr. Gartzke’s research has been published in numerous academic journals and edited volumes. He received a PhD in Political Science from the University of Iowa in 1997.