The Political Economy of Green Technology 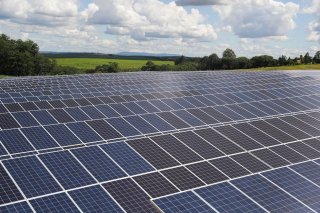 Over the past two centuries, millions of dedicated people – revolutionaries, activists, politicians, and theorists – have been unable to curb the disastrous and increasingly globalised trajectory of economic polarisation and ecological degradation. This is perhaps because we are utterly trapped in flawed ways of thinking about technology and economy – as the current discourse on climate change shows.

Rising greenhouse gas emissions are not just generating climate change. They are giving more and more of us climate anxiety. Doomsday scenarios are capturing the headlines at an accelerating rate. Scientists from all over the world tell us that emissions in ten years must be half of what they were ten years ago, or we face apocalypse. School children like Greta Thunberg and activist movements like Extinction Rebellion are demanding that we panic. And rightly so. But what should we do to avoid disaster?

Most scientists, politicians, and business leaders tend to put their hope in technological progress. Regardless of ideology, there is a widespread expectation that new technologies will replace fossil fuels by harnessing renewable energy such as solar and wind. Many also trust that there will be technologies for removing carbon dioxide from the atmosphere and for “geoengineering” the Earth’s climate. The common denominator in these visions is the faith that we can save modern civilisation if we shift to new technologies. But “technology” is not a magic wand. It requires a lot of money, which means claims on labour and resources from other areas. We tend to forget this crucial fact.

I would argue that the way we take conventional “all-purpose” money for granted is the main reason why we have not understood how advanced technologies are dependent on the appropriation of labour and resources from elsewhere. In making it possible to exchange almost anything – human time, gadgets, ecosystems, whatever – for anything else on the market, people are constantly looking for the best deals, which ultimately means promoting the lowest wages and the cheapest resources in the global South.

It is the logic of money that has created the utterly unsustainable and growth-hungry global society that exists today. To get our globalised economy to respect natural limits, we must set limits to what can be exchanged. Unfortunately, it seems increasingly probable that we shall have to experience something closer to disaster – such as a semi-global harvest failure – before we are prepared to seriously question how money and markets are currently designed.

Take the ultimate issue we are facing: whether our modern, global, and growing economy can be powered by renewable energy. Among most champions of sustainability, such as advocates of a Green New Deal, there is an unshakeable conviction that the problem of climate change can be solved by engineers.

What generally divides ideological positions is not the faith in technology as such, but which technical solutions to choose, and whether they will require major political change. Those who remain sceptical to the promises of technology – such as advocates of radical downshifting or degrowth – tend to be marginalised from politics and the media. So far, any politician who seriously advocates degrowth is not likely to have a future in politics.

Mainstream optimism about technology is often referred to as ecomodernism. The Ecomodernist Manifesto, a concise statement of this approach published in 2015, asks us to embrace technological progress, which will give us “a good, or even great, Anthropocene”. It argues that the progress of technology has “decoupled” us from the natural world and should be allowed to continue to do so in order to allow the “rewilding” of nature. The growth of cities, industrial agriculture, and nuclear power, it claims, illustrate such decoupling. As if these phenomena did not have ecological footprints beyond their own boundaries.

Meanwhile, calls for a Green New Deal have been voiced for more than a decade, but in February 2019 it took the form of a resolution to the American House of Representatives. Central to its vision is a large-scale shift to renewable energy sources and massive investments in new infrastructure. This would enable further growth of the economy, it is argued.

So the general consensus seems to be that the problem of climate change is just a question of replacing one energy technology with another. But a historical view reveals that the very idea of technology is inextricably intertwined with capital accumulation, unequal exchange and the idea of all-purpose money. And as such, it is not as easy to redesign as we like to think. Shifting the main energy technology is not just a matter of replacing infrastructure – it means transforming the economic world order.

In the 19th century, the industrial revolution gave us the notion that technological progress is simply human ingenuity applied to nature, and that it has nothing to do with the structure of world society. This is the mirror image of the economists’ illusion, that growth has nothing to do with nature and so does not need to reckon with natural limits. Rather than seeing that both technology and economy span the nature-society divide, engineering is thought of as dealing only with nature and economics as dealing only with society.

The steam engine, for instance, is simply considered an ingenious invention for harnessing the chemical energy of coal. I am not denying that this is the case, but steam technology in early industrial Britain was also contingent on capital accumulated on global markets. The steam-driven factories in Manchester would never have been built without the triangular Atlantic trade in slaves, raw cotton, and cotton textiles. Steam technology was not just a matter of ingenious engineering applied to nature – like all complex technology, it was also crucially dependent on global relations of exchange.

This dependence of technology on global social relations is not just a matter of money. In quite a physical sense, the viability of the steam engine relied on the flows of human labour energy and other resources that had been invested in cotton fibre from South Carolina, in the US, coal from Wales and iron from Sweden. Modern technology, then, is a product of the metabolism of world society, not simply the result of uncovering “facts” of nature.

The illusion that we have suffered from since the industrial revolution is that technological change is simply a matter of engineering knowledge, regardless of the patterns of global material flows. This is particularly problematic in that it makes us blind to how such flows tend to be highly uneven.

This is not just true of the days of the British Empire. To this day, technologically advanced areas of the world are net importers of the resources that have been used as inputs in producing their technologies and other commodities, such as land, labour, materials, and energy. Technological progress and capital accumulation are two sides of the same coin. But the material asymmetries in world trade are invisible to mainstream economists, who focus exclusively on flows of money.

Ironically, this understanding of technology is not even recognised in Marxist theory, although it claims to be both materialist and committed to social justice. Marxist theory and politics tend toward what opponents refer to as a Promethean faith in technological progress. Its concern with justice focuses on the emancipation of the industrial worker, rather than on the global flows of resources that are embodied in the industrial machine.

This Marxist faith in the magic of technology occasionally takes extreme forms, as in the case of the biologist David Schwartzman, who does not hesitate to predict future human colonisation of the galaxy and Aaron Bastani, who anticipates mining asteroids. In his remarkable book Fully Automated Luxury Communism: A Manifesto, Bastani repeats a widespread claim about the cheapness of solar power that shows how deluded most of us are by the idea of technology.

Nature, he writes, “provides us with virtually free, limitless energy”. This was a frequently voiced conviction already in 1964, when the chemist Farrington Daniels proclaimed that the “most plentiful and cheapest energy is ours for the taking”. More than 50 years later, the dream persists.

Electricity globally represents about 19% of total energy use – the other major energy drains being transports and industry. In 2017, only 0.7% of global energy use derived from solar power and 1.9% from wind, while 85% relied on fossil fuels. As much as 90% of world energy use derives from fossil sources, and this share is actually increasing. So why is the long-anticipated transition to renewable energy not materialising?

One highly contested issue is the land requirements for harnessing renewable energy. Energy experts like David MacKay and Vaclav Smil have estimated that the “power density” – the watts of energy that can be harnessed per unit of land area – of renewable energy sources is so much lower than that of fossil fuels that to replace fossil with renewable energy would require vastly greater land areas for capturing energy.