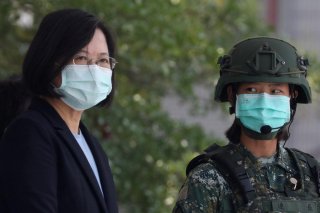 Against the backdrop of increasing numbers of Chinese military exercises around Taiwan, political suppression in neighboring Hong Kong, and aggressive obstruction of the island democracy’s international space amid the Wuhan coronavirus pandemic (COVID-19), Taiwan’s Mainland Affairs Council (MAC)—the cabinet level agency in charge of the country’s cross-Strait policy—released its latest official opinion polls tracking Taiwanese public opinion on several key cross-Strait issues. These polls are conducted periodically and on average three times per year since 2010. In the first official poll released since the island’s January 2020 presidential and legislative elections, the latest series of results shows a dramatic increase in the percentage of people who view China as “unfriendly” (不友善) towards the Taiwanese government and its people. Amid an escalation of cross-Strait tension over the past four years, the government agency’s March 2020 poll indicates that the numbers of people on the island who think China is unfriendly toward the Taiwan government and the public have risen to 76.6 percent and 61.5 percent, respectively. These figures represent significant jumps of 7.2 percent and 6.9 percent from the previous poll conducted in October 2019 and are the highest numbers in 10 years.

The results of the newest government poll on public views toward China’s unfriendliness continued a multi-year increase in the number of Taiwanese who view China as unfriendly. This upward trend began in 2016 following Tsai Ing-wen’s (蔡英文) election as president and the commencement of Beijing’s multifaceted pressure campaign to isolate the new administration. These measures include poaching Taiwan’s diplomatic allies; military coercion; economic coercion; excluding Taiwan from international organizations; pressuring foreign corporations; pressuring Taiwan’s non-diplomatic allies; economic incentives; political warfare; cyber espionage; and traditional espionage. In the poll conducted in March 2016, two months after Tsai was elected president for her first-term, the numbers were already high at 59.3 percent (government) and 50.6 percent (people), especially when compared to the last poll taken during the Ma Ying-jeou (馬英九) administration in November 2015, with figures at 51.2 percent (government) and 46.9 percent (people).

In addition to surveying people’s views on China’s unfriendliness, two other polls track Taiwanese public opinion on issues such as the people’s views on unification, independence, or maintaining the status quo (民眾對統一、獨立或維持現狀的看法) and their views toward the pace of cross-Strait exchanges (民眾對兩岸交流速度的看法).

While the percentage of those favoring some form of status quo still represents the clear majority at 84.4 percent—roughly equivalent to the 86.7 percent polled in March 2016 after Tsai Ing-wen won her first presidential race—the percentage of those preferring to gradually move towards independence has noticeably increased by 6.9 percent, while those who want independence immediately has also increased by 2.8 percent. This shift in public sentiment has occurred despite the Tsai administration’s repeated emphasis on maintaining the status quo in the Taiwan Strait and Beijing’s incessant pressure campaign since she was elected president. Therefore, the increasing preference for independence seems correlated to Beijing’s intensifying pressure campaign, as well as other events like the ongoing civil unrest in Hong Kong, which are pushing more people in Taiwan toward independence from China—even immediately if necessary.

In the polling done on the public’s view on the pace of cross-Strait exchanges, the March 2020 poll indicates that 45.1 percent feel the current pace is just right, 26.6 percent think that the pace is too slow, 15.4 percent do not know, and 12.9 percent feel that it is too fast. By comparison, the March 2016 poll also showed 45.1 percent felt the pace was then also just right, but 21 percent felt it was too slow, 12.4 percent don’t know, and 21.5 percent felt that it was too fast at the time. Interestingly, people who held the view that cross-Strait exchanges were “too slow” experienced a huge spike following Tsai’s election, jumping to a high of 45 percent in June 2017, plateauing, and then dropping precipitously from August 2018 from 42.9 percent to the current 26.6 percent. The cause of this rise and fall may be attributed to the political shock of the abrupt halt of cross-Strait exchanges in June 2016, which was followed by General Secretary Xi Jinping’s hardening stance, increased Chinese military provocations, the Hong Kong crisis, and the current Wuhan coronavirus (COVID-19).

According to the Central News Agency of Taiwan, another poll also released reportedly by MAC—which is not yet available on its website—showed that up to 90 percent of the respondents disagreed with the PRC’s “one country, two systems” (一國兩制) proposal, 90.5 percent opposed its threat of force against Taiwan, and 91.5 percent did not agree with its suppression of Taiwan’s diplomacy. Perhaps most importantly, all the polls seem to show that mainstream public opinion in Taiwan is dead-set against the CCP ’s negative attitude toward Taiwan. In another telling demonstration of the factors shaping Taiwanese public sentiment, 91.6 percent objected to the Chinese Communist Party’s (CCP) obstruction of Taiwan’s participation in the World Health Organization (WHO) amid the pandemic. Additionally, 75.2 percent agree that the government should call on the Beijing authorities to stop political manipulation in Taiwan by the WHO and co-operate in dialogue.

Since CCP General Secretary Xi Jinping proposed “Xi’s Five Points” (習五點) of “Exploring Two-Systems – Taiwan Version” (探索兩制台灣方案) on January 2, 2019 and introduced other hardline measures, polls show that the percentage of respondents who oppose “one country, two systems” has significantly risen from 75.4 percent to 90.0 percent. On a more recent policy matter, 86.4 percent expressed support for President Tsai’s declaration during her re-election victory speech on January 11, 2020 that cross-Strait interactions should be promoted on the basis of “peace, reciprocity, democracy, and dialogue” (和平、對等、民主、對話). Furthermore, 92.1 percent believe that the future of Taiwan and the development of cross-Strait relations should be determined by Taiwan’s 23 million people in order to maintain long-term stability.

Perhaps in anticipation of Beijing’s response to the release of the polling data, the deputy chairman of MAC, Chen Ming-Chi (陳明祺), appealed to Beijing authorities to “take a rational view of the Taiwan people’s response and the key foundation of cross-Strait interaction proposed by President Tsai Ing-wen, and to consider cooperating with Taiwan to deal with issues, health and pandemic prevention, not political containment.”

Despite the CCP’s dual “soft-hard” approach of simultaneously trying to woo Taiwanese people and businesses through various preferential economic measures while intensifying its pressure campaign on the government, it is clear that the enticements have not had the desired effects on Taiwanese public opinion towards China. Perhaps one reason is that the constituencies that actually benefit from these measures still represent a minority. Moreover, as Taiwan’s younger generation becomes more civic-minded and politically conscious, even those who may financially benefit will not necessarily be enticed to favor PRC’s authoritarian political system. More importantly, China’s continued saber-rattling tactics across the Taiwan Strait, its response to the COVID-19 crisis, and its obstruction of Taiwan’s entry into international institutions have clearly negatively influenced Taiwan public opinion towards China. In this context, the emphasis of CCP Politburo Standing Committee member Wang Yang’s (汪洋, b. 1955) statement at the “2020 Taiwan Work Conference” earlier this year on raising the effectiveness of these measures comes to mind. However, it remains to be seen whether any innovative approaches to genuinely engage Taiwan will come of it, as China continues to ramp up its military exercises around Taiwan while attempting to isolate the island nation.