Poll: Young Americans Are More Likely to Resent the Rich Key point: Young people are fueling the rise of socialists such as Bernie Sanders.

The Cato 2019 Welfare, Work, and Wealth National Survey finds that Americans under 30 stand out from their parents and grandparents’ in their attitudes toward socialism, capitalism, and resentment toward the rich. These results may help explain the striking success of self-described democratic socialist Bernie Sanders in capturing the support of the young.

Young Americans Are Equally Favorable toward Capitalism and Socialism 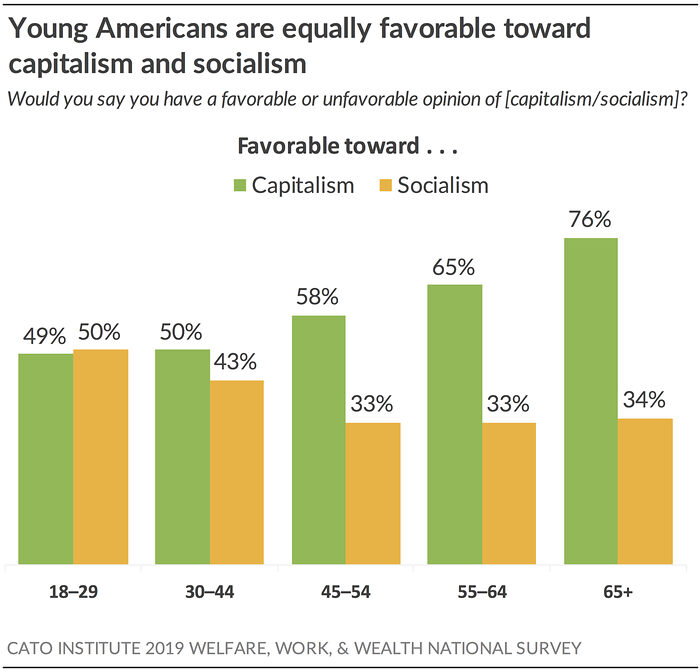 Consistent with attitudes toward capitalism and socialism, young Democrats are about three times more likely to support self-described democratic socialist Sen. Bernie Sanders (I-VT) for the Democratic nomination for president. As of spring 2019, 40% of under-30 Democrats supported Bernie Sanders compared to 14% of Democrats over age 65. In reverse, older Democrats were nearly three times as likely as younger Democrats to prefer that former Vice President Joe Biden be the party’s nominee (28% vs. 11%).

Young Americans are the only cohort in which a majority believe the wealthy didn’t earn their wealth. A slim majority (52%) of Americans under 30 say that “most” rich people in the United States got rich “by taking advantage of other people.” In contrast, a strong majority (72%) of seniors (65+) say that most wealthy people in America “earned their wealth” without exploiting people. 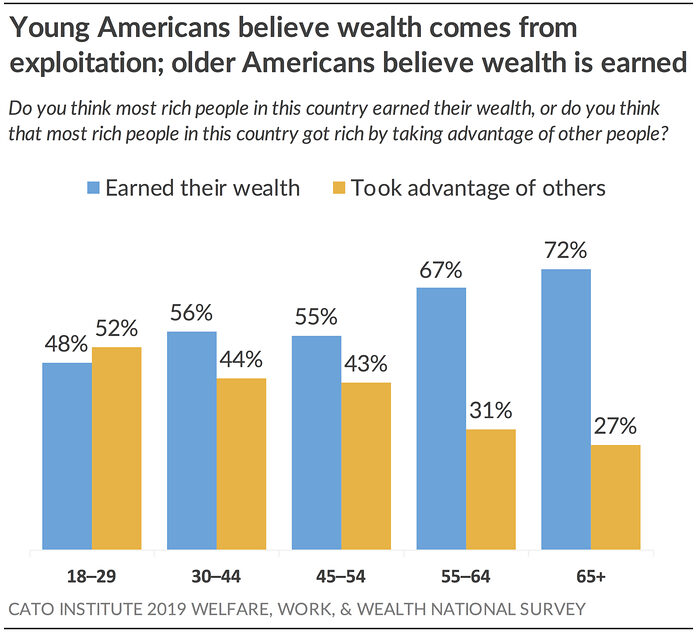 Across the board, younger people are more likely than older people to hold negative attitudes toward the rich. Americans under 30 are about 20–35 points more likely than Americans age 65 and older to feel “angry” when they read or hear about rich people (44% vs. 11%), to feel more “resentment” than “admiration” of rich people (39% vs. 16%), to believe it’s “immoral” for society to allow people to become billionaires (39% vs. 13%), and to believe that citizens taking violent action against the rich is sometimes justified (35% vs. 10%). Young people are also about 10–25 points more likely than older people to believe billionaires are a threat to democracy (51% vs. 26%), to disagree that billionaires earned their wealth by creating value for others (39% vs. 26%), and to disagree that rich people make society better off by investing in new businesses that create jobs and invent technology (38% vs. 21%). 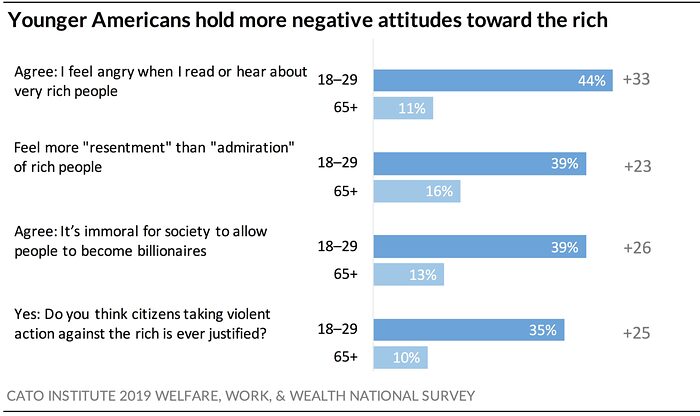 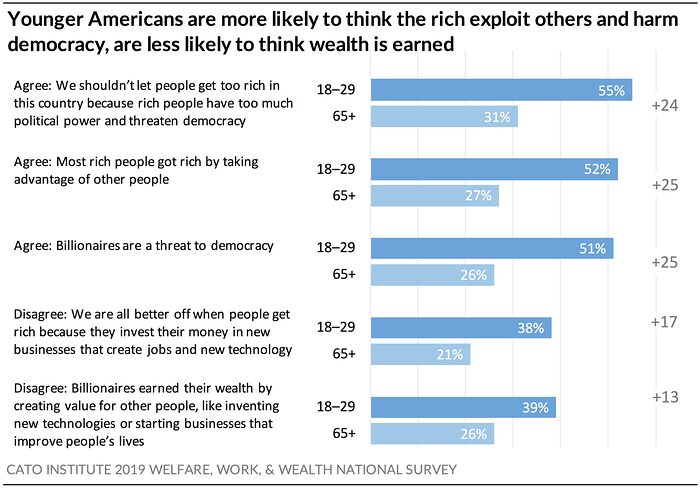 Young People Are More Supportive of Taxes on the Rich

Consistent with these findings, young people are also more supportive than older Americans of raising taxes on the rich. Wealth redistribution produces the greatest age gap. Americans under 30 are the only age cohort with a majority (53%) in favor of redistributing wealth from the rich to the poor. In contrast, 20% of Americans 65 and over agree. 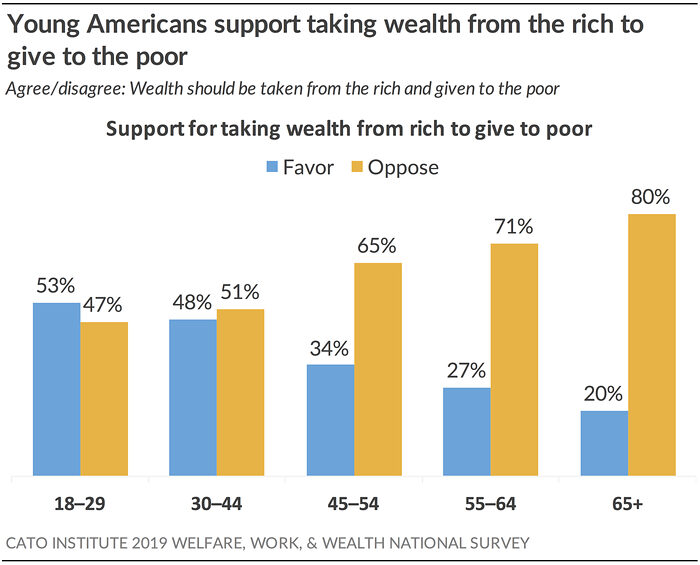 Young Americans in 1978 Also Were More Supportive of Income Redistribution 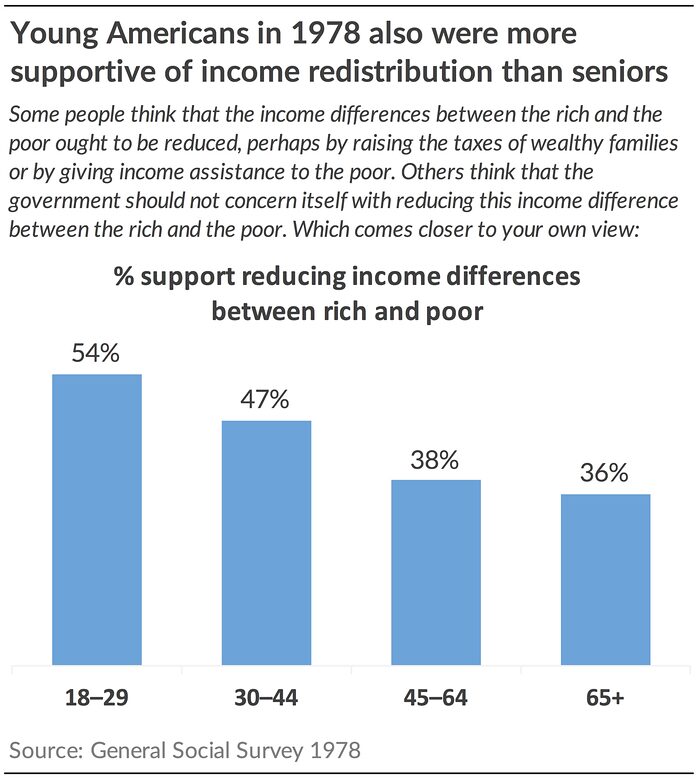 Are young people today unique? Perhaps not. A General Social Survey conducted in 1978 found that Americans under 30 were also more supportive of wealth redistribution. At that time, Americans under 30 were the only age cohort in which a majority (54%) supported the government “reducing income differences between rich and poor” by “raising the taxes on wealthy families or by giving income assistance to the poor.” In contrast, only about a third (36%) of Americans 65 and over agreed.

These data suggest that Americans may change their minds as they get older about the rich and how much to tax them.

This article by Emily Ekins originally appeared in the CATO at Liberty blog in 2019.