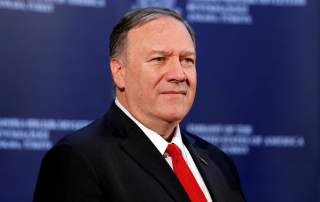 Secretary of State Mike Pompeo called a reporter’s question “insane” in a joint interview with The Wichita Eagle and Kansas City Star while visiting his home state.

Pompeo and presidential adviser Ivanka Trump were visiting the WSU Tech National Center for Aviation Training and Textron Aviation in Wichita, Kansas, Thursday when the secretary of state sat down for an interview.

The Wichita reporter asked Pompeo if “U.S. credibility” had been “undercut” in light of the president’s decision to pull the remaining 1,000 troops from northern Syria and his “treatment of the Kurds.”

“The whole predicate of your question is insane,” Pompeo said. “The word of the United States is much more respected today than it was just two and a half years ago.”

“The whole predicate of your question is insane.”

Pompeo’s reply when asked about US credibility in wake of abandonment of the Kurds.
Good interview by @jonshorman for Wichita Eagle and Kansas City Starhttps://t.co/cG23UQMGQW pic.twitter.com/psyvHBZBLd

“[President Donald Trump] said, ‘If you use chemical weapons, I’m going to take action,'” Pompeo said, adding that the administration is “clear” about what it is prepared or unprepared to take action on.

One such “clear” expectation is the role other countries should have in keeping peace in the Middle East, the secretary of state said.

“This president’s been very clear that we have high expectations for how other countries, not just our European partners, but countries in Africa, countries in the Middle East, countries throughout Asia, who depend on the Strait of Hormuz to be up … they need to do that for themselves, as well. And when they do, America will continue to be an enormous partner,” Pompeo said.

The reporter’s question came after Donald Trump announced during a Wednesday press briefing that he is lifting sanctions against Turkey after a five-day ceasefire agreement, which gave Kurdish fighters an opportunity to retreat from the Turkey-Syria border unscathed, concluded.

Many Republicans, such as South Carolina Sen. Lindsey Graham, condemned the president’s Oct. 6 decision to pull troops from Syria over concerns that it would put U.S.-allied Kurdish fighters who helped defeat the Islamic State at risk of Turkish aggression.