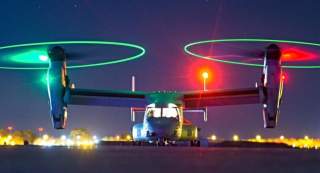 The V-22 Osprey just can’t catch a break. After years of controversy over the tilt rotor transport machine that flies like an airplane and a helicopter, the Osprey appeared to be settling down, with Japan buying a few in 2016 and Israel now expressing interest in purchasing some.

But the V-22 has problems with its engines. The culprit? Dirt, according to a report by the U.S. Department of Defense’s Inspector General IG).

The problem is with the Engine Air Particle Separator, or EAPS, which is designed to allow the Osprey to operate in desert or dusty conditions. “This can result in large amounts of soil on the ground being blown into the air and ingested into the V-22 engine, which can contribute to premature engine failure,” the report noted. “The EAPS’ purpose is to protect the V-22 engine by removing soil from the air that enters the engine.”

In other words, an air filter. But Naval Air Systems Command’s PMA-275, the Navy office that oversees the Osprey for the Marine Corps as well as Air Force Special Operations Command, did not require EAPS to meet the specifications of the engine manufacturer.

Interestingly, the IG suggested that the test process for the latest version of EAPS is misleading. “The PMA-275 intends to test the third EAPS redesign with soil that is not representative of all environments where the V-22 operates, relying instead on military standard soil compositions and soil concentrations based on testing from a single desert environment. This occurred because the PMA-275 is not taking advantage of the ability to tailor military standard soil samples.”

The Osprey program office’s response to the IG investigation: “it is not ‘technically possible’ to develop, integrate, and field an EAPS that is fully capable of protecting the V‑22 engine from all possible soil types and concentrations for unlimited durations.”

Controversy has been practically baked into the Osprey since its first flight in 1989. The concept sounded great: an aircraft that could ferry troops a thousand miles like a transport plane, and then tilt its rotors vertically so that it could drop the troops into combat like a helicopter. Yet the design has been plagued by crashes, transmission failures, maintenance difficulties and safety questions.

That the V-22 can’t be made to operate optimally in all environments seems logical enough. But given that the U.S. military has been fighting in desert or dusty environments for nearly 20 years, it is surprising that the V-22’s air filter hasn’t received more attention.