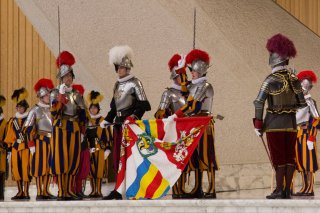 Sometimes called "the world's smallest army" or "the Pope's army," it is officially the Guardia Svizzera or Swiss Guards, the soldiers responsible for the safety of the pope. The Pontifical Swiss Guard is made up of 110 to 125 soldiers. The unit not only serves as the escorts to the pontiff but also as the watchmen for Vatican City and the pontifical villa of Castel Gandolfo.

This small unit is made up of former Swiss soldiers, and recruits must be unmarried Swiss Catholic males between the ages of 19 and 30 who have completed their basic training with the Swiss Armed Forces. While largely ceremonial, since the failed assassination attempt made on Pope John Paul II in 1981 there has been a much stronger emphasis on the actual protection duties and this has included unarmed combat as well as with small arms.

Today the Swiss Guards are among the oldest standing military units in the world. First founded on January 22, 1506, by Pope Julius II, it became known as a mercenary force when Switzerland was known for having some of the best fighting men in Europe. Despite the fact that all are Swiss, the unit remains completely independent of the actual Swiss military. Each guard agrees to a mandatory 2-year contract, and that can be extended upon request.

The guard's colorful uniforms, which may seem straight out of the Renaissance (or perhaps even a Renaissance Fair), are striped in the colors – red, dark blue, and yellow – of the once-powerful Italian Medici family of Florence. Contrary to popular belief the uniforms weren't designed by Italian artists Michelangelo or Raphael. The actual designer is lost to time, but the uniforms were last updated in 1914 by Jules Repond, a former commander of the unit.

Each uniform is made up of 154 pieces and is tailor-made inside the Vatican especially for each member of the guard. As with other ceremonial units around the world, the look is somewhat anachronistic in the 21st century with its white ruffles, high plume "Morion" helmet with ostrich feathers to denote rank and breastplates. In this traditional dress, the guards are equipped with pikes and swords, a tradition that hasn't changed with the passing years.

The men of the Swiss Guard look ready to fight a war from centuries ago, which is somewhat fitting as the unit hasn't actually taken part in any modern war. However, this doesn't mean that the Guards haven't had to fight.

The Swiss Guard's first major engagement actually proved both the force's dedication and its abilities.

That action occurred on May 6, 1527, when the army of Holy Roman Emperor Charles V sacked Rome and attempted to invade Saint Peter's Basilica in Vatican City. The small Swiss Guard held back the attackers long enough for Pope Clement VII to escape through a half-mile long passageway to Castel Sant'Angelo, the large fortress nearby. Nearly 150 of the 189 guards serving the pope gave their lives to see him to safety. To honor that first battle, each May 6 new recruits are sworn into the guard by the pope himself.