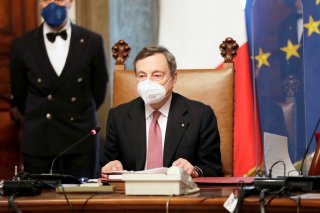 Italy isn’t famous for its political stability. Since World War II, there have been sixty-seven governments. This January, the country witnessed yet another crisis. Former Prime Minister Matteo Renzi withdrew his party Italia Viva from the coalition government, triggering a series of events that culminated in the resignation of prime minister Giuseppe Conte.

The politicians disagreed over plans to reallocate more than €200 billion from the EU recovery fund. Following the fall of the government, President Sergio Mattarella held meetings with leaders of coalition parties to try to save the situation. But he didn’t celebrate any success.

Therefore, Mario Draghi, the former head of the European Central Bank (ECB), was tasked with forming a new government. He is known as a capable technocrat and a skilled banker with a strong pro-European and pro-Western orientation. As president of the ECB, Draghi gave a famous speech in 2012 that saved the euro and earned him the nickname “Super Mario.” Since 2019, when he was replaced in the central bank by Christine Lagarde, there have been rumors about his possible political future. However, not many anticipated that he would try to unite the Italian political scene.

The new prime minister decided to form a government of “national unity.” It will rely on left-wing populists from the Five Star Movement, the center-left Democratic Party, Matteo Renzi’s liberals, and the social democrats, but also former Prime Minister Silvio Berlusconi and Matteo Salvini with his nationalist League. Only the radical far-right party Brothers of Italy won’t participate in the executive power. Nevertheless, Mario Draghi has the support of almost 90 percent of deputies and senators in the bicameral parliament.

As a result, the coalition bloc includes diverse parties that aren’t ideologically compatible but are willing to work together in the interests of the people of their country. The politicians have set aside all differences to focus on rescuing the coronavirus-battered economy (and, of course, on more than 200 billion EUR from the European Union’s recovery fund).

Hence, Italy has a government where long-term rivals and politicians standing on opposite ideological barricades will try to work together. It could be a beginning of a change in Italian politics for decades to come. In recent years, there has been already much discussion about whether we’re witnessing the end of the so-called Second Republic, which has lasted in Italy since the 1990s, and the era of the Third Republic begins. The coming months may finally give us a clear answer.

The government of national unity is generally a broad coalition that unifies the entire political spectrum and involves all (or almost all) parties; typically in a country that is going through a major social or economic crisis. These types of governments aren’t at all too common in liberal democracies and appear only in exceptional situations which, due to their seriousness, are critical from the point of view of the public. Usually, the whole political spectrum can be unified during the war or economic crisis. Such broad coalitions normally last only a short period of time, but in some situations, they are necessary to ensure the stability of the country and to launch reforms that will lead the republic and its citizens out of a national emergency.

After the Second World War, European countries were destroyed and their economies exhausted by a protracted conflict. Therefore, politicians of republics liberated from Nazi Germany formed broad coalitions to take their countries through subsequent reconstruction. The communists had worked together with the social democrats, liberals, and conservatives to rebuild their war-torn states.

At least in theory. In reality, the whole picture was a little bit different. The east of the continent, which fell within the Soviet sphere of influence, quickly turned into a communist bloc, and the reforms gained a strong Stalinist flavor from the very beginning. In France and Italy, the governments of national unity lasted until May 1947, when the communists were cut off from executive power as a result of the beginning of the Cold War.

After 1945, Czechoslovakia also found itself within the sphere of influence of the USSR. The Third Czechoslovak Republic was ruled by the so-called National Front. It included all major political parties: the communists, the social democrats, the Czech national socialists, the People’s party, and the Slovak democrats. However, the times of national unity lasted only until February 1948, when Klement Gottwald and his communist comrades seized full power in a coup d’état.

The Italian government is facing challenges that will require unity on the domestic political scene. The appointment of technocrat Mario Draghi, former president of the ECB and darling of the European establishment, as Italy’s prime minister, immediately stabilized the markets and reassured foreign observers.

Italy ended last year in the deepest economic recession since the 1940s. However, it wasn’t in good economic condition even before the pandemic and its economy has been stagnating for decades. Therefore, the situation in this country is all the more urgent. It needs a new, responsible approach, as well as difficult and painful reforms, which, together with the EU recovery fund, could form the basis of future growth and prosperity.

“Today we have, as did the governments of the immediate post-war period, the opportunity or rather the responsibility to start a new reconstruction,” Mario Draghi said in a speech before the senate, which was interrupted by applause twenty-one times. “Today unity is not an option but a duty. But it is a duty guided by what I am sure unites us all: love for Italy.”

The new Italian government is created at the most difficult time since World War II. Cooperation between politicians of such distinct parties and opposite ideological movements is undoubtedly a chance for long-awaited change. At a time of increasing political polarization, Italy’s government can set an example for the other Western democracies (especially for the United States). We can only hope that the Italian Third Republic won’t turn out similarly to the Czechoslovak one.

Martin Horicka is a doctoral student at Comenius University in Slovakia. He specializes in the history of the cold war and international relations after World War II.