Post-Coronavirus Asia: A Land of Great Power Tensions Set to Boil Over? 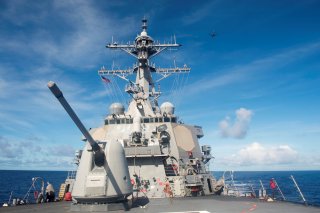 Discussion has flourished about what kind of "new" world will emerge after the coronavirus pandemic recedes. There is nothing new about hoping a global crisis will generate peace and cooperation, and nothing new about how it will turn out. The world will go on as before because nothing has changed geopolitically in the last few months other than major trends have accelerated. A quick tour around the Indo-Pacific region shows continued tension and conflict.

On May 8, a gun battle erupted when Chinese troops crossed the border into Muguthang Valley in Sikkim province, a long-disputed region under Indian control but which Beijing claims is being illegally occupied. Tensions have been rising since January. In April, a Chinese “surveillance” ship rammed and sank a Vietnamese fishing boat in a disputed area of the South China Sea. Both countries claim sovereignty over what Hanoi calls the Hoang Sa archipelago and Beijing calls the Paracel islands. Besides sitting across vital shipping lanes, the islands also mean access to potentially rich undersea energy and mineral resources. Beijing has claimed Sikkim and the entire South China Sea as its territory based on the long past historical domination of these areas by Imperial China.

On May 4, the Ministry of National Defense confirmed that China will establish an air defense identification zone (ADIZ) in the South China Sea, to match the one they have in the East China Sea where they have disputes with Japan. An ADIZ requires all aircraft to identify themselves, the point of which is to acknowledge the official expansion of Chinese airspace over the expanded maritime domain it claims.

The United States, along with other maritime powers including Japan, India, the United Kingdom, and France have conducted "freedom of navigation" operations to demonstrate their rejection of Beijing's territorial claims. On April 28, the People’s Liberation Army boasted it had “expelled a US warship that trespassed into Chinese territorial waters off the Xisha Islands in the South China Sea.” The story in Global Times, the media outlet of the ruling Chinese Communist Party, featured a photo of a Chinese warship firing a missile, but no shots were fired in the confrontation.  By its own accounts, all the PLA did was “organize naval and aerial forces to follow the U.S. guided missile destroyer USS Barry.” They warned it to leave the area and claimed it had been expelled when all it did was complete its transit through the area. A bold PLA claim for propaganda purposes that further raised tensions. As the Global Times story asserted, “US warships and aircraft have been frequently operating in the South China Sea, East China Sea and Taiwan Strait recently. Chinese troops will resolutely fulfill their duty, safeguard national sovereignty and security as well as peace and stability in the South China Sea.” In Beijing’s view, it is the United States and its allies who are provoking conflict by upholding international law.

The Taiwan Strait deserves mention as tensions are mounting there in the wake of the re-election of President Tsai Ing-wen. She leads the Democratic Progressive Party which is based on Taiwanese nationalism. The DPP has been growing in strength as younger generations have come to identify themselves as Taiwanese, not Chinese. Taiwan has been governed from Beijing for only four years (1945 to 1949) out of the last 125. A May 11 article in the South China Morning Post claimed that Beijing was trying to tap down rising “nationalist fervor” on Chinese social media calling for an invasion of Taiwan. The article also noted, “recently a number of commentators and retired military commanders have called for Beijing to retake control of the island….Some former military leaders have argued that the United States – which is bound by law to help the Taiwanese government defend itself – is presently unable to do so because all four of its aircraft carriers in the Pacific have been affected by the Covid-19 outbreak.” After the U.S. aircraft carriers Theodore Roosevelt and Ronald Reagan had to return to port to handle flu cases among their crews, China sent its carrier Liaoning with its escorts through the “first island chain” into the Pacific to demonstrate it was the local superpower. The United States responded by bringing in reinforcements and stepping up its operating tempo to counter any perception of weakness.

A previous SCMP article cited Chinese strategists as fearing an invasion of the democratic island would be too costly and that Beijing will have to mobilize greater strength to do so. However, a lengthy essay published on May 12 by the PLA reported “The Chinese People's Liberation Army (PLA) has carried out combat readiness patrols in the Taiwan Strait region on many occasions…since February this year” and that its troops “are determined and capable of thwarting all ‘Taiwan independence’ separatist activities.” The article carried a direct threat to America at its conclusion, stating in bold type. “The Taiwan question is China's core interest and the bottom line of China that cannot be challenged” and that if the United States “repeatedly probes and even breaks through China's bottom line, it will eventually bring fire to itself.” President Xi Jinping is adamant that Taiwan “must and will” be absorbed into the mainland and during his tenure in office if possible.

Further north, Japan has released its 2020 East Asian Strategic Review. The report proclaims a "free and open Indo-Pacific" that goes beyond the Japan-U.S. alliance to expand military cooperation with South Korea, Australia, India, and within ASEAN. It has already signed “Acquisition and Cross-Servicing Agreements” with the armed forces of Australia, the UK, Canada, and France. Another is pending with India. It also uses military aid to build ties within Southeast Asia. These efforts are all meant to build a coalition to contain a China that is threatening islands that form a strategic link between Tokyo and Taipei.

The carrier Ronald Reagan, which is based in Japan, is now back at sea. And to fill in the gap while the carrier Theodore Roosevelt recovers in Guam, the amphibious assault carrier America (which now embarks F-35B fighters) and the guided missile cruiser Bunker Hill have been operating off the coast of Malaysia near an area in dispute between Indonesia and China, and also showing the flag off Vietnam. China’s aggression in Southeast Asia is not confined to the sea. Beijing has built a series of dams at the headwaters of the Mekong River to produce electricity for southern China. But these dams also give Beijing leverage over Southeast Asian lands which depend on the Mekong for rice irrigation and fishing. Food security is already jeopardized by drought and has been further endangered by erratic water flows from the Chinese dams.

China has reacted strongly to an Australian demand for an investigation into the origin of the coronavirus outbreak. Beijing is threatening trade with Canberra. The Global Times stated on May 13 how China views commerce as a part of foreign policy, “When the world enters the buyer's market, China has the right to select trading partners that can maximize its interest.”

The United States has increased its backing for those resisting Chinese aggression since “the pivot” from the Middle East to the Pacific Rim instituted by the Obama administration. President Barack Obama was, however, reluctant to strike at the economic roots of Beijing’s rise. President Donald Trump has focused on international economics, targeting the outsourcing of American jobs and production capacity to China and Beijing’s theft of intellectual property. He has based his case on national security grounds. The pandemic has highlighted to the American public the dangerous dependency the United States has fallen into with China for a variety of strategic goods starting with medicine and including electronics, steel, auto parts and a host of critical supply chains. Efforts to decouple from China in key areas are underway led by the State and Commerce departments.

It is hoped that many of these industries can be brought back to America but even if they are merely diverted to trading partners who are allies or otherwise aligned with the United States, the gain to security will be substantial. New Delhi is putting itself forward, sending out invitations to 1,000 American firms doing business in China asking them to shift operations to India. Trump has been actively courting Prime Minister Narendra Modi on a variety of high-tech projects and arms sales. India has been designated a Major Defense Partner of the United States.

The Japanese government is also offering incentives to its firms to shift critical production out of China. Business firms may resist efforts to put national security ahead of private profits. The U.S. Chamber of Commerce still says its “policy and advocacy efforts are guided by the belief that commercial engagement and the expansion of trade and investment ties between the United States and China benefit both countries and their business communities.” However, just as the pandemic has postponed the Chamber’s eleventh China Business Conference, the international situation will require commerce to follow the flag and adjust to a world that will operate on the basis of great power competition for the foreseeable future.