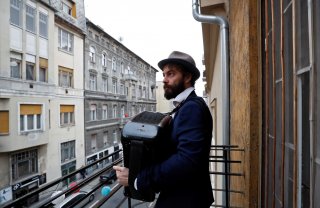 Many musicians are reaching out from isolation on balconies, in condos or the outdoors during the COVID-19 pandemic.

Italian tenor Maurizio Marchini sings “Nessun dorma” from his balcony while the police in Mallorca, Spain play music, dance and sing in the streets and people watch from balconies. Many people are posting #songsofcomfort.

American actor, comedian and musician Steve Martin’s March 21 viral Banjo Balm tweet (at the time of this writing, about 9.8 million views) followed by March 27 “Banjo Calm” (one million views) are two videos that bear witness to the ways we rely on the arts within social media to build connections and create community in times of isolation.

Music educators, community music facilitators and ethnomusicologists value the power of music to build community. These three fields coincide when they examine the notion of music for all that transforms societies and people. They identify humans’ basic drive towards “making things special,” as explained by Ellen Dissanayake, an affiliate professor of music education at University of Washington School of Music.

Our communities make the music we need when we need to do so. We mark significant events, both traumatic and joyful, with the arts.

For years, Martin’s comedy hijinks included his banjo; the public increasingly became aware of how talented he is as a musician.

Martin’s album The Crow: New Songs For The Five-String Banjo won best Bluegrass Album at the 2009 Grammy awards; he also received awards for 2001 Best Country Instrumental Performance and the 2013 Best American Roots Song. He is now as respected as a musician as he is as a comedian and actor.

Martin’s stand-up comedy and early film roles were zany. His movie characters gradually transitioned into ones who were a little odd but wise. This shift in his acting roles parallels his rise as a prominent figure in roots and bluegrass music.

Musician David Byrne describes ways space and place have always influenced music. From operatic stages and philharmonic concert halls to punk rock concerts at CBGB in New York, composers and musicians write and play for spatial and acoustic qualities of specific venues. What works in an outside amphitheatre may well fail at Carnegie Hall.

Martin presents us a talented musician who becomes our beloved great uncle in the “Banjo Balm” viral clip. We see him alone, as many of us are — or at least feel — in social isolation, but he does not appear lonely. He stands outdoors, relaxed, just as many of us wish we could be today.

He smiles gently at us with compassion. Thus, Martin transforms his outdoor space into an intimate venue that millions share in mostly indoor settings. We feel he’s come to visit us at home and we’ve welcomed our buddy inside. We are all family in this context, isolating apart together.

Michael Schutz, associate professor of music cognition/percussion at McMaster University, explores composers’ cues for musical emotion and concludes that “the challenges in producing low pitched, slow moving melodies” on the banjo make the instrument “ill-suited for conveying sadness.” Martin himself has made the same point in his stand-up comedy.

Martin’s “Banjo Balm” overcomes this tendency with rich, warm tone and a slow tempo. The major sounding melody descends with each phrase, suggesting repose, up until the final coda where it leaps and ascends, offering us some optimism. We tend to hear music in a major keys as happy or light, while minor keys tend to suggest sadness or darkness. This music calms us; we feel lifted from melancholy.

However the high lonesome sound associated with bluegrass music returns in “Banjo Calm.” It begins in a minor mode, a darker but still warm tone, and slowish tempo. At 50 seconds in, Martin fills in the spaces between the warm, slow and melodic notes with traditional clawhammer — fast, high pitch fill — that identifies the cheerfulness of bluegrass, even in sad songs.

Martin’s ever-changing social and cultural capital provides traction for both video tweets. His musicality and star power alone made “Banjo Balm” viral, however, this social media phenomenon occurs with so much music in so many places around the world.

Canadian fiddler Ashley MacIsaac says musicians make music because “we have no choice — that’s just what we are, we’re artists.” Through these YouTube and Twitter experiences, both professional and amateur musicians-in-isolation engage community expression and audiences appreciate their demonstration of solidarity.

This phenomenon transcends individual performances in any one genre, and functions as community building, or at least community expressions of human spirit. We see professionals performing, community singalongs and Canadian rockers Arkells offering free, online music lessons. Then, there are countless artists performing online from their homes.

Amateurs too are performing for their communities, including doctors at the Mayo Clinic, children and grandmothers.

Let’s all join in this community apart together!