The Power of U.S. Diplomacy Can Protect Ukraine’s Heritage Sites 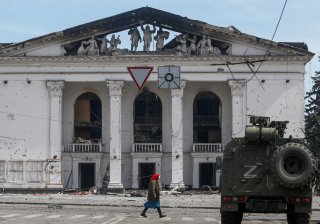 The Russian invasion of Ukraine has military planners again facing the dilemma of how to protect cultural heritage during large-scale urban warfare operations. It is also clear from previous Russian military operations in places such as Syria that Russian tactics include, at best, the wanton disregard for cultural heritage sites, and at worst the deliberate targeting of such sites as part of a larger campaign of cultural genocide. While many organizations are active in the preservation, protection, and monitoring of heritage in Ukraine, diplomats and other officials can also be useful in negotiating the protection of cultural heritage during conflict. Soon after the invasion of Ukraine began, Lee Satterfield, the assistant secretary of state for educational and cultural affairs, said, "The United States is committed to helping the people of Ukraine protect and preserve their historically important sites. Ukraine’s cultural heritage is irreplaceable, and its damage or destruction would be a profound loss to the entire world. We are closely monitoring the situation and will call out Russia’s acts of destruction."

For a model, the State Department should look back to the start of World War I, when the U.S. government assisted in the protection of cultural heritage during the German siege of Antwerp. While not an active participant in the war, the U.S. diplomatic staff helped to facilitate the protection of architecturally and historically important buildings in Antwerp. The actions of the diplomatic corps can serve as a model for future operations where the United States can still foster and facilitate cultural heritage protection despite not being involved in direct military operations.

In August 1914, after numerous European powers were dragged into war, Germany realized it would have to fight on two fronts, leading it to implement the von Schlieffen Plan. The von Schlieffen Plan called for the use of most of the German Army to attack through neutral Belgium and the Netherlands to strike into the core of France, ensuring its defeat before turning to the east to face the slower mobilizing Russian Empire.

World War I brought massive changes to the way Western nations conducted war. For example, on August 19, 1914, the German Army entered the university town of Louvain in Belgium, which had been abandoned by the Flemish Army. Approximately a week into the occupation, German soldiers, possibly fueled by rumors of a counteroffensive, panicked and began to massacre civilians. Moreover, the Germans burned the university library, which included special collections of medieval manuscripts and books. The event resulted in the loss of more than 230,000 books, including 750 medieval manuscripts. This action was immediately seen by the rest of the world as a barbaric act, and it was a total disregard for the agreed-upon conduct of war, which explicitly prohibited the seizure and destruction of “institutions dedicated to religion, charity and education, the arts and sciences.”

The war was less than a month old, and the Allied powers had already witnessed German attacks on the cultural heritage of an occupied country. However, the incident pushed other nations to think about how future military operations might damage heritage.

In August 1914, German forces invaded Belgium and captured Liege. After that defeat, most Flemish forces retreated to Antwerp, leaving the other major Flemish cities to fall to the advancing forces. The Germans bypassed Antwerp during the initial drive but returned to lay siege to the city in September and October.

The fear of further attacks on heritage became a concern among the governments of Europe, and therefore, some of them looked to the United States for assistance in negotiating the protection of those heritage sites. In early September 1914, the U.S. ambassador to France, Myron T. Herrick, stated in a telegram to the secretary of state that he hoped to continue serving in France, and that the French government was not planning on establishing a capital outside of Paris. In regards to the rich heritage of Paris, the capital of France and a target of German forces, the ambassador wrote that he believed “historic monuments and art treasures did not belong to any one nation but were international in their character and [the French government] hoped that … [his] presence in Paris would constrain the enemies of France to observe the customs of war.” Herrick suggested that the mere presence of the American ambassador and the threat that the United States might enter the war would protect the museums and monuments of Paris from the destruction they feared from the German forces.

Europeans were not the only ones that feared the destruction of European monuments and heritage from the war. Also in September 1914, R. Clipston Sturgis, the president of the American Institute of Architects, wrote a letter to President Woodrow Wilson asking “that every precaution be taken against the destruction of architectural monuments situated in the field of this terrible war.” This letter represented an appeal by those in the United States who understood the importance of European heritage.

After weeks of fighting, Germany began its final assault on Antwerp in late September, relying on heavy artillery bombardment of the city, even though, Article 27 of the 1907 Hague Convention stated that during “sieges and bombardments all necessary steps must be taken to spare, as far as possible, buildings dedicated to religion, art, science, or charitable purposes, historic monuments … provided they are not being used at the time for military purposes.”

The German attack would have destroyed those monuments and other places that should have been protected. However, the Germans began talks to protect the heritage of the Belgium capital. On September 30, 1914, the German military in Brussels contacted both the U.S. minister to Belgium and the Spanish ambassador to communicate with the Belgian government at Antwerp and express Germany’s “willingness to spare the historic monuments at Antwerp in the event of a bombardment of that city provided the Belgians will agree not to use those monuments for military purposes.” German forces were engaging “neutral” diplomats for the talks.

The promise of the Germans and the threats of the destruction of the city must have been enough for the Flemish. On October 4, the American general counsel in Antwerp sent a telegram to the State Department that stated the:

On October 11, 1914, Berlin sent out a dispatch that all historical monuments in Antwerp would “be spared as much as possible.” A detailed map with the positions of “the principal architectural features of the city” was provided to the German civil administration through the American ambassador, and the German government provided the plan to every artillery commander for reference. Antwerp was spared further military siege during the war and was liberated by the Allies in 1918.

While the U.S. Army and the British Army have been active in recreating the Monuments Officers of World War II due to their experiences in the Middle East, it is important to note that diplomacy can still be the most important channel in protecting heritage during times of conflict. Moreover, the State Department has been active in protecting heritage through its Cultural Heritage Center and Ambassadors Fund for Cultural Preservation. Diplomats can operate under a cloak of neutrality that is not offered to military personnel. They also have existing relationships with national leaders, as well as other cultural and social dignitaries. Finally, they can include the protection of heritage sites in broader negotiations. While it is important for military forces to understand the importance of protecting cultural heritage, we should also take the model of the American diplomats in Antwerp who worked valiantly to protect the city.

Dr. Edward Salo is an associate professor of history and associate director of the Heritage Studies Ph.D. Program at Arkansas State University in Jonesboro Arkansas. Previously, Salo worked for cultural resources management firms for fourteen years protecting prehistoric and historic resources across the globe. He is researching the weaponization of heritage in irregular warfare.