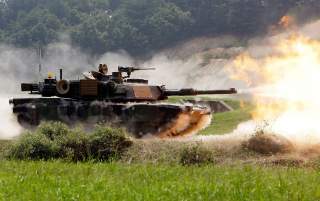 The Army’s 82nd Airborne division will drop into hostile territory to lead air assaults in as many as five attack operations across three allied countries of enormous strategic significance to NATO forces.

“Having our troops and allies involved in what is called a joint forcible entry will enable us to go in and take an area such as an airfield so it can used by friendly forces,” Col. Joe Scrocca, Director of Public Affairs, U.S. Army Europe, told reporters at the Association of the United States Army annual symposium in Oct.

These exercises, which will closely resemble the weapons, tactics and combat strategies joint forces would be called upon to perform in the event of major enemy attack, will span across air, sea, land, cyber and space domains throughout Europe.

It is all part of a massive NATO-Army exercise called DEFENDER, the largest U.S.-based Army exercise of forces to Europe in the last 25 years, intended to mobilize large scale deployments with 20,000 Army soldiers and as many as 17,000 U.S. allied forces.

Unlike many previous exercises at the Brigade Combat Team level, this operation will encompass large portions of the U.S. Army to include National Guard, Reserve and active units, Scrocca explained; the ops will be expansive, reaching numerous seaports, convoys and land-based combat facilities.

“We are going to bring this all together at the same time...multiple countries, multiple ports and multiple bases. Interoperability is about relationships, technology and systems. You have to be interoperable at the tactical and strategic level,” Scrocca said.

DEFENDER is scheduled to take place from April to May 2020, with personnel and equipment movements occurring from February through July 2020, an Army report said.

Overall, Eighteen countries are expected to participate, with exercise activities occurring across 10 countries. Some of the key participants include Germany, the U.K., Norway, Sweden, Canada, Italy, Poland, Lithuania and others. Defender will include intermediate staging bases, river crossings, air and sea movements, rapid deployment ops, equipment transport and use of Army Prepositioned Stocks in Belgium and Germany.

While the exercise is of course intended to function as a massive deterrent against any kind of great power European attack on NATO, such as a Russian invasion, Scrocco emphasized that DEFENDER will operate with a 360-degree focus to include the prospect of enemy attack from any direction.

At the same time, the countries chosen for forcible entry exercises clearly include areas of substantial strategic value when it comes to deterring possible Russian aggression. Furthermore, there has been a long process of escalating tensions with Russia, not only including the invasion of Ukraine several years ago but more recent problems as well. Some of these include the cancellation of the INF Treaty, increased development of low-yield nuclear weapons, new weapons testing, Eastern European force maneuvering and tense global hotspots including the two countries.

Nonetheless, Scrocca stressed that while the exercise may have some parallels to a large-scale training and preparation event during the Cold War called Reforger, DEFENDER will be much different. Unlike a linear, mechanized attack against force concentrations in a fixed area of Europe, DEFENDER will rely heavily upon dispersed combat networking, Air-Ground-Sea coordination, allied interoperability and newer technology.