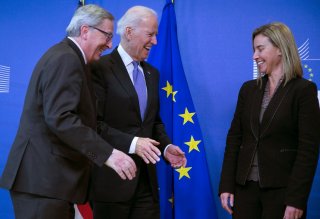 In May 2017, as President Trump headed into his first NATO meeting, Europeans were more than a little bit anxious. It is an understatement to say that President Biden will get a different reception as he makes his first overseas trip in Europe in June to attend a series of summits with leaders of the Group of Seven, the North Atlantic Treaty Organization, and the European Union.

This substantial political capital and goodwill represent an opportunity not just to rebuild but to revitalize the transatlantic partnership, thereby unlocking greater cooperation on shared challenges, from China to fighting climate change. Seizing that transatlantic honeymoon requires both sides to adopt not just a new tone but a new mindset, to leave behind old rhetoric as well as old misconceptions.

There is no doubt that President Biden's election was received with deep relief in European capitals after four years of a profound deterioration in transatlantic relations. Europeans were quick to announce their desire to build a “new transatlantic agenda” with Washington to tackle the most pressing issues from COVID-19 to climate. The new U.S. administration also had high ambitions for the transatlantic relationship: “The partnership between Europe and the United States is, and must remain, the cornerstone of all that we hope to accomplish in the twenty-first century” underlined President Biden at the 2021 virtual Munich Security Conference.

Recent actions have illustrated this new approach, be it the participation of the U.S. President or the Secretary of State in EU meetings or coordinated sanctions against Moscow over the arrest of Alexei Navalny or against Beijing in response to China’s treatment of the Uyghur minority. Earlier this May, Europeans also agreed to formally invite the United States to participate in an EU Permanent Structured Cooperation (PESCO) project dedicated to military mobility, following longstanding frictions regarding U.S. access to PESCO.

Despite this renewed transatlantic cohesion, misunderstandings nonetheless persist on both sides and have progressively come back to the surface. First, consultation is sometimes confused with genuine coordination. On Afghanistan, the U.S. administration chose to simply inform ex-post European allies about the future of U.S. military presence even though their security interests were at stake too. Europeans have sometimes preferred to pursue their own course despite calls from Washington for better transatlantic coordination. This was notably the case when the European Union decided to move forward on an investment agreement with China, dismissing concerns from the Biden administration over the issue of forced labor. Europeans have since heard these concerns and the agreement has been blocked by the European Parliament.

Second, transatlantic security continues to be seen almost exclusively through a NATO lens in Washington. There is no question that NATO remains the cornerstone of Europe's collective defense. Europeans are committed to strengthening the transatlantic alliance as they continue to increase their defense budgets. Adapting NATO's strategic concept to reflect the deep changes in the strategic environment is critical to keep the Alliance fit for purpose. Broadening its understanding of European security would allow Washington to also tap into what the European Union, or even ad hoc arrangements, can bring to the table. Even though Europeans have regularly called for a dedicated dialogue between the U.S. and the EU on security and defense, the White House prefers to focus this dialogue on global challenges such as COVID-19, trade, or climate.

Third, Europeans themselves still struggle to square the circle between European strategic autonomy and a strong transatlantic partnership. While European nations such as France consider that the U.S. election does not change the need for a sovereign Europe, many Europeans have expressed doubts about this objective, fearing that it will send contradictory signals to the new administration.

Left unaddressed, these misunderstandings could pose serious challenges over the long run. Transatlantic cooperation could turn into a hollow shell if the United States and Europe do not genuinely consult and coordinate on shared security challenges. Joint communiqués or punctual coordinated sanctions fall short of a strategy. Adopting a large approach to transatlantic security is also key to grasp Europe’s full potential. As the strategic competition with Russia or China goes far beyond the defense realm, the European Union has a lot to offer in this respect, whether in terms of cybersecurity, the fight against disinformation, support to disruptive technologies, or foreign investments screening. The EU can also play a useful role in defense, whether by supporting capability development, facilitating military mobility, or helping Europe handle crises in its own neighborhood. Ad hoc European arrangements such as the European Intervention Initiative can also play a useful role by bolstering the unity of Europeans. Finally, lingering debates among Europeans over the notion of strategic autonomy could jeopardize Europeans' growing effort to shoulder a greater share of the burden.

This situation is revealing of the persistence of logics which are ill-fitted to today’s reality. Europe and the United States have profoundly changed since 2016. Europeans have significantly expanded the European Union’s role in security and defense. In response to a rapidly deteriorating security environment, European nations have put aside their divisions to collectively launch ambitious initiatives such as the European Defense Fund, or by strengthening their operational commitment in the Sahel or the Mediterranean Sea. Having the Commission wade into defense or link trade and security illustrates a strategic awakening of the Europeans. The U.S. international posture has also changed as the Biden administration promotes a “foreign policy for the middle class” that would lead Washington to focus more on domestic issues and demand greater efforts from its partners.

Changing our approach is needed to overcome these misconceptions. First, President Biden should take the opportunity of his trip to Europe to send a clear message that a strong European Union in the field of defense will make the transatlantic partnership stronger. In that regard, Europe’s desire to be more sovereign is actually similar to Biden’s ambition to “build back” the United States at home to effectively compete with China or Russia. It is in Washington's interest to take the wind out of the sails of toxic debates about “autonomy” or “sovereignty” and help focus the conversation on tangible policies and initiatives. Second, Washington and Europeans should engage in a substantive dialogue on security and defense issues at NATO but also through the European Union. An EU-U.S. dialogue could address critical issues from arms control and non-proliferation to crisis management, cyber defense, or maritime security.

Last but not least, the United States and Europe should prioritize deeper cooperation between the EU and NATO, whose achievements remain modest despite promising steps since 2016. Harnessing the full potential of both organizations will be paramount to effectively address the multifaceted challenges posed by the rise of China and the aggressive posture of Russia.

At the end of the day, Washington's underlying objective should be to foster among Europeans a sense of ownership of their security challenges. This would be the key to ensure the sustainability of European efforts, ensuring that the United States finds across the Atlantic stronger and more resilient partners, able to shoulder a greater share of the burden and join forces on common issues. A new mindset is needed if the United States and Europe want the June summits to be the beginning of a new chapter in the transatlantic relationship, not the repetition of past mistakes.

Pierre Morcos is a visiting fellow in the Europe, Russia, and Eurasia Program, and a French diplomat in residence, at the Center for Strategic and International Studies in Washington.

Olivier Rémy-Bel is a visiting fellow at the Atlantic Council in Washington and most recently served as a Europe and Africa staffer to the French Minister of Defense.