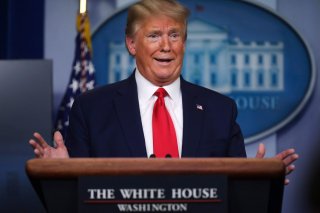 Trump has launched diatribes against the WHO, accusing it not only of a poor response to the health crisis but also of having a pro-China bias. Officials in the Trump administration and others have accused the WHO of being overly praiseworthy of China’s response and its transparency about the severity of the virus. Seeking to place blame on the mounting number of COVID-19 cases and deaths in the United States, President Trump has viewed the WHO as his target. Trump has also complimented himself on his administration’s decision to impose travel restrictions on China.

It was only a week earlier that President Trump threatened to cut funding to the WHO. The United States is the single largest financial contributor to the WHO, providing more than $400 million in 2019.

Other members of the Republican Party have also criticized the WHO and its relationship with Beijing. Senator Lindsey Graham (R-SC) has tweeted, “The current WHO leadership has proven to be incompetent and shown overwhelming evidence of China bias. Cutting off funding to the WHO at this time is the right move.” Meanwhile, Senator Martha McSally (R-AZ) has called on WHO head Tedros Adhanom Ghebreyesus to resign.

While Republican lawmakers have supported the president’s decision, others, both at home and abroad, have been critical. Domestically, the Speaker of the House Nancy Pelosi has said that the decision is “senseless…dangerous, illegal, and will be swiftly challenged.” Bill Gates, whose Bill & Melinda Gates Foundation is the second-largest contributor of WHO funding, has called the decision “as dangerous as it sounds.”

Internationally, the decision has been widely rebuked. United Nations Secretary-General António Guterres has said that the WHO is “absolutely critical to the world’s efforts to win the war against COVID-19.” Meanwhile, German Foreign Minister Heiko Maas tweeted, “Blaming does not help. The virus knows no borders.”

Public health experts have also expressed the importance of the WHO. “Without a WHO that’s empowered there will be many, many more deaths, and not just as it marches through sub-Saharan Africa, which is next, but also here in the United States,” says Lawrence Gostin, professor of global health at Georgetown University. Leslie Dach, chair of the pressure group Protect Our Care, comments, “This is nothing more than a transparent attempt by President Trump to distract from his history downplaying the severity of the coronavirus crisis and his administration’s failure to prepare our nation…To be sure, the World Health Organization is not without fault but it is beyond irresponsible to cut its funding at the height of a global pandemic. This move will undoubtedly make Americans less safe.”

The American Medical Association has also weighed in with this statement: “Fighting a global pandemic requires international cooperation and reliance on science and data. Cutting funding to the WHO—rather than focusing on solutions—is a dangerous move at a precarious moment for the world.”

Concerning Trump’s criticism of the relationship between the WHO and China, some have agreed with the U.S. president; others have countered his accusations.

U.S. Secretary of State Mike Pompeo has claimed that the WHO “declined to call this a pandemic for an awfully long time because frankly the Chinese Communist Party didn’t want that to happen.” Meanwhile, White House economic adviser Peter Navarro has said that “President Trump is absolutely correct to have a full investigation of how that happened and what China’s role might’ve been ... because we cannot have a World Health Organization that’s going to fail us in a pandemic and that’s what happened.”

On the opposite end of the spectrum, there have been those that deny that the WHO’s actions were unduly influenced by Beijing. Dr. Mike Ryan, head of the WHO Health Emergencies Program has said of the organization’s communications that “In the first weeks of January, [it] was very, very clear,” indicating that the timing of its warnings were not set by China. Adam Kamradt-Scott, professor of global health at the University of Sydney, and Lawrence Gostin have noted the difficulties of multilateral organizations criticizing the actions of one of its members and that it is unwise to do so.

A hollowing out of global institutions

This is not the first time that Trump has ceased U.S. participation in global institutions and agreements. As part of his “America First” program, President Trump has sought to decouple the United States from the United Nations system and various international agreements, particularly those under the Obama administration.

Perhaps the most visible example was Trump’s decision in June 2017 to withdraw from the 2015 Paris Agreement on climate change. The administration also pulled out from the Joint Comprehensive Plan of Action (JCPOA), or Iran nuclear deal, in May 2018. Both actions sparked outrage and criticism from the international community, particularly from signatories in the case of the JCPOA. For example, America’s European allies expressed “regret and concern” by the withdrawal from the JCPOA.

These actions have undermined U.S. soft power and its leading role in creating and maintaining multilateral organizations. Indeed, the foundation of the U.S.-led post-World War II order—the United Nations—is progressively being dismantled by its creator. This recent decision to halt WHO funding only further cements this trend.

The U.S. departure from these agreements and institutions has left a deep gap in leadership and resources to combat and resolve these various issues. It is likely that rival powers such as Russia and China will exploit this political vacuum, at great detriment to U.S. interests. Indeed, Moscow and Beijing are already engaging in “mask diplomacy” in Europe and across the world.

Global collaboration and cooperation are a must

As various commentators have said, the virus knows no borders and does not discriminate. If one part of the world is hurting, so is the rest of the world. Therefore, international cooperation is necessary to confront this common transnational threat. While the widespread nature of the virus has necessitated national and local responses, ultimately, joint efforts must be pursued.

Firstly, the Trump administration should reverse its plan to halt WHO funding. Despite the past and present failings of the organization it nevertheless is the only viable multilateral organization that can effectively manage this crisis. The potential loss of U.S. funding could exacerbate the crisis, particularly in the Global South, where public health infrastructure is weak or nonexistent.

Additionally, it should lead efforts in both the G-7 and G-20 to determine global solutions to stabilize and repair the world economy. Unlike the most recent G-7 meeting, in which Secretary Pompeo argued for labeling the virus the “Wuhan virus,” future meetings should rise above politics and direct their focus to the issue at hand.

Finally, the United States should present itself as a credible and faithful ally to its partners around the world. Reports and rumors that the Trump administration was trying to obtain a vaccine from a German biopharmaceutical company solely for U.S. use and that shipments of medical supplies intended for European countries were redirected to the United States have undermined transatlantic relations. Thus, it is critical that Washington procure medical supplies on the basis of fair play and even help organize the distribution of supplies to where they are most needed.

These actions are essential for reconstructing and reasserting America’s role on the world stage. The U.S. response to and assistance to combat the Ebola outbreak in West Africa proves that it is capable of mounting an effective health response. Accordingly, armed with this experience, the United States can be a light for all nations.

Spencer Wong is a Korean Studies Spring 2020 Research Assistant at the Center for the National Interest.