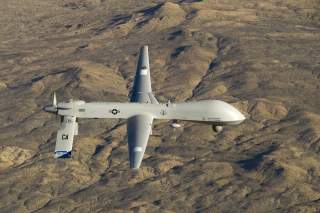 President Donald Trump confirmed Saturday a son of Osama bin Laden was killed during a U.S.-led counterterrorism operation along the border of Afghanistan and Pakistan.

“Hamza bin Ladin, the high-ranking al-Qa’ida member and son of Usama bin Ladin, was killed in a United States counterterrorism operation in the Afghanistan/Pakistan region,” Trump said in a statement, confirming reports from July that the al Qaeda leader had been killed.

“The loss of Hamza bin Ladin not only deprives al-Qa’ida of important leadership skills and the symbolic connection to his father, but undermines important operational activities of the group.  Hamza bin Ladin was responsible for planning and dealing with various terrorist groups,” he continued.

It is unclear when Hamza bin Laden died, though it has been reported it was between 2017 and 2019.

The State Department put out a $1 million reward for information on Hamza bin Laden’s whereabouts earlier this year.

Hamza bin Laden, who was born in Saudi Arabia in 1989, was last heard from in a March 2018 statement to al Qaeda-friendly media outlets calling for revolt on the Arabian Peninsula. He called for al Qaeda attacks against the U.S., France and Israel in 2015, according to a dossier from the United Nations Security Council.

“Hamza bin Laden has been given a more prominent role within Al-Qaida, and is considered to have the capability to follow through with his threats,” reads the dossier, which said that Hamza bin Laden’s popularity was increasing within the terror organization. “Hamza seeks to grow Al-Qaida’s network and use a new phase of terrorist attacks in major Western cities to raise his profile and announce the return of Al-Qaida with himself as a new leader.”

Osama bin Laden was killed in a Navy SEAL operation on May 2, 2011.