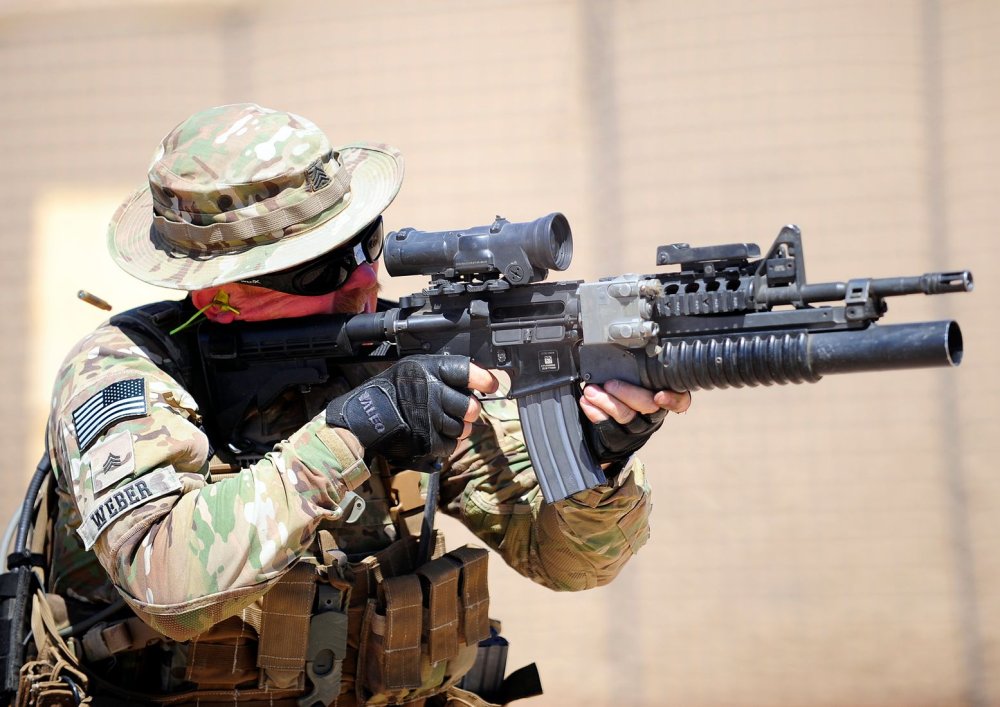 The weapon weighed less than four pounds and was only an inch wide. However, the mini-rifle was still more than two inches longer than the Air Force wanted. To shorten the gun down to this length, Colt’s designers put the IMP-221’s trigger right up near the front of the gun. The main firing mechanism sat in the frame’s rear.

Military aircrews always have to train for the possibility of crashing behind enemy lines. In the event of this disaster scenario, the pilots and crews must rely on the kinds of weapons—mainly pistols and knives—they can carry on their persons or stuff into small survival kits.

In the late 1960s, the famous Colt firearms company hoped to give fliers a tiny assault rifle instead. But the final version was awkward, inaccurate and difficult to use.

In 1969, engineers at Colt offered the U.S. Air Force a unique lightweight gun, primarily for bomber crews. Since the unusual-looking rifle had no butt stock, shooters would have had to brace the so-called Individual Multi-Purpose Weapon against their bicep.

“Consideration was … given to what an aircrewman might have with him when he bailed out or what he might find on the ground which could serve as a stock,” stated an official Air Force report. “The only practical solution was the man’s arm.”

Two years before, the Air Force’s Strategic Air Command had outlined a number of basic requirements for this new weapon. At the time, the flying branch still used World War II-era survival rifles.

These crude rifles shot .22-caliber bullets and small shotgun shells. While functional, the guns were only good for killing snakes or hunting small game.

“Capable of killing a man at 100 yards,” was SAC’s first demand for the new firearm, the technical study noted. The old war-era rifle wouldn’t do.

More than lethal, the Air Force wanted its next survival weapon to be extremely compact. The gun couldn’t be any longer than 13 inches, or more than one inch wide.

For a highly practical reason—the weapon needed to fit inside the cramped confines of a cockpit. Crews needed to be able to grab the guns quickly in an emergency, too.

Before coming up with its stock-less survival weapon, Colt toyed around with a tiny M-16 for pilots. The company trimmed down the standard battle rifle’s barrel, stock and even the pistol grip to create the Model 608.

But to meet the Air Force’s space constraints, bomber crews would have had to break the gun in half—making it unusable. As a result, the flying branch’s own weaponeers decided that getting rid of the stock was the only real solution.

“Folding, telescoping, detachable, and wire skeleton stocks were considered,” the report stated. “All of these except the wire skeleton exceeded either weight, volume, or dimensional restrictions.”

A stubby M-16 wouldn’t work, so technicians continued to experiment with various pistols and modified rifles. And the Air Force focused on a new bullet—the .221 Remington.

“The caliber .221 cartridge was chosen for the demonstrator because it produced a weapon midway between the weapons of ultimate interest, a caliber .17 survival rifle and a 5.56-millimeter rifle/submachine gun,” stated the technical overview.

Colt took this basic concept and ran with it. The new semi-automatic gun — known as the IMP-221, meaning Individual Multi-Purpose and .221 caliber — was extremely compact.

The weapon weighed less than four pounds and was only an inch wide. However, the mini-rifle was still more than two inches longer than the Air Force wanted. To shorten the gun down to this length, Colt’s designers put the IMP-221’s trigger right up near the front of the gun. The main firing mechanism sat in the frame’s rear.

The pistol grip swiveled left and right, so the gun and its 30-round magazine could rest neatly on an airman’s forearm. The sights rotated so the shooter could aim straight.

By 1971, Colt had tweaked the design even more. The gun now had special bracket that held—and could lock onto—the shooter’s arm.

“Demonstrations proved the basic concept was not only feasible but exceeded expectations,” the Air Force report declared. “Further efforts will be made to improve … and to modify the design for quantity production.”

Unfortunately, the Air Force evaluators had discovered the weapons were highly inaccurate. As the shooter swiveled around with the rifle locked in place, the motion threw off the gun’s freely-moving sights.

Another problem was adjust for individuals. People come in different sizes, and Colt expected shooters to hold the guns at different positions on their arms. But with plans to tuck the tiny rifles inside airplanes, an individual couldn’t properly calibrate it for his or her own shape and size.

“An effort should be made to improve the sights, either by a simple design breakthrough, or by adding enough hardware to provide adequate sighting for all shooters,” the technical report recommended.

Colt and the Air Force abandoned plans for a .17-caliber version. Instead, Colt modified the guns to shoot standard 5.56-millimeter ammunition.

Gwinn went on to sell his own version, the Bushmaster Arm Pistol, to civilian shooters. He also put the gun’s basic parts into a more conventional package to create the Bushmaster Rifle. Today, Gwinn’s old company—now renamed Bushmaster Firearms—makes AR-15 and M-16 variants for private customers, police and soldiers.

But the arm pistols never proved popular with civilians. As one can see from videos across the Internet, they’re more of a novelty than anything else—and no one can agree on how to hold them at the range.

Civilian shooters often innovate when the military doesn’t. But no one has ever figured out the best way to shoot the Air Force’s tiny assault rifle.

This first appeared in WarIsBoring.