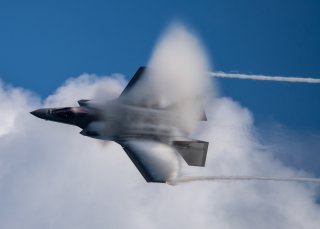 The information exchange took place during the Army’s Project Convergence 21, an experiment that expands upon prior success networking forces in real time to incorporate more multi-domain operations. Project Convergence, which launched last year, aims to establish a breakthrough in the speed of warfare. Last year, Project Convergence showed that military officials can reduce the targeting, verification, decisionmaking and attack cycle from twenty minutes to twenty seconds.

Building upon what could be described as a breakthrough success in 2020, the Army sought to expand Project Convergence more fully into the joint sphere. Last year, there was some peripheral experimentation between the Marine Corps’ F-35 fighter jets and Army ground soldiers. Lockheed Martin has confirmed that the F-35 jet was used to connect with ground troops during the experiment. This tactic could be used in future tactical scenarios.

The military services have made moderately successful air-ground coordination efforts to varying degrees over the years. In fact, the F-35 jet is known for its close air support capabilities. But its real-time data-sharing of target information and enemy fire during combat maneuvers breaks new ground. Fifth-generation aircraft may have used specially configured and secure datalinks, radiofrequency connectivity or computer-enabled software programmable radio to achieve this feat. The ability to link otherwise incompatible information systems is often done through technologies capable of translating, adjusting or converting the format to enable secure information sharing.

These days, war planners are leveraging breakthrough technologies to gather, organize and act upon time-sensitive information with unprecedented speed and accuracy. For example, an F-35 jet could use its speed to quickly reposition and send ground troops enemy troop location information from the other side of a ridge faster than previously thought possible. Ground troops could send to that jet the targeting details of pockets of enemy fighters out of sight of overhead surveillance. This would improve situational awareness in warfare.