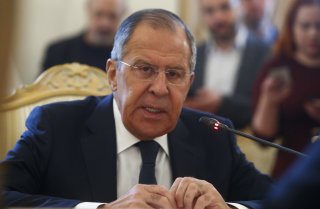 Israeli prime minister Naftali Bennett’s office indicated on Thursday that he had accepted an apology from Russian leader Vladimir Putin over Foreign Minister Sergey Lavrov’s false claims that Adolf Hitler was part Jewish and that “the biggest anti-Semites are the Jews themselves.” The conversation between Bennett and Putin occurred amid a firestorm of criticism in Israel and the Western world regarding Lavrov’s comments.

Bennett and Putin spoke by phone on Thursday, and both sides released statements summarizing the meeting afterward. Only Israel’s statement described Putin’s language as an apology, claiming that Bennett had “accepted President Putin’s apology for Lavrov’s remarks and thanked him for clarifying the President’s attitude towards the Jewish people and the memory of the Holocaust.”

The Russian statement did not reference an apology. Instead, it specified that Putin had called Bennett ahead of May 9, Russia’s Victory Day, to commemorate the Nazi defeat and commit to preserving the memory of the Holocaust against Soviet Jews during World War II.

“The President of Russia recalled that of the 6 million Jews tortured in ghettos and concentration camps, killed by the Nazis during punitive operations, 40 percent were citizens of the USSR,” the statement prepared by Putin’s office read. It added that Putin “asked to convey wishes of health and well-being to the [Soviet] veterans living in Israel.”

“Naftali Bennett, in turn, noted the decisive contribution of the Red Army to the victory over Nazism,” it continued.

Israel, which enjoys relatively close ties with Russia and has a large Russian immigrant population, has largely remained neutral in the ongoing Russian invasion of Ukraine, and Bennett offered his services as a mediator between Moscow and Kyiv in the early days of the conflict.

However, Lavrov’s comments—made in response to suggestions that the Ukrainian government did not need to be “de-Nazified,” as Ukrainian president Volodymyr Zelensky is Jewish—were widely interpreted as anti-Semitic. Israeli foreign minister Yair Lapid, the son of a Holocaust survivor, described the Russian diplomat’s comment as “unforgivable and scandalous and a horrible historical error.”

“The Jews did not murder themselves in the Holocaust,” Lapid added. “The lowest level of racism against Jews is to blame Jews themselves for anti-Semitism.”

Bennett also denounced the remarks as unacceptable and summoned the Russian ambassador to Tel Aviv in protest.