Is Putin Getting Russia's Spending and Economy All Wrong? 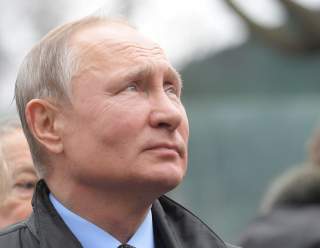 Accessing the funds needed to make such efforts effective, however, would require breaking away from Moscow's tried-and-true method of fiscal restraint, which has helped guarantee a rainy day fund for when things get tough (as they did most recently during the country's 2015 recession). But by keeping the economy stuck in a cycle of stagnation, maintaining this penny-pinching policy will come at the risk of degrading Russia's living conditions and industrial capacity — and ultimately, its political stability and global standing.

Russia's continued limited growth prospects following a 2014-2015 economic crisis have led to a growing assertiveness among the country's top political ranks in seeking relief. Despite Putin's repeated calls for the government to restore growth and even outpace global GDP growth (around 3 percent), Russia's economy only expanded 1.3 percent in 2019, with the most optimistic assessments of 2020 growth reaching only 1.9 percent. Putin outlined a pragmatic approach to remedying these problems in his Jan. 15 State of the Union address via a broad social spending plan. The plan, which has been calculated to cost about 4.1 trillion rubles ($64 billion) by 2024, seeks to protect the weaker segments of Russia's population through measures to raise pensions, support new mothers, encourage childbirth and support those whose incomes are barely sufficient to get by.

Russia's new Prime Minister Mikhail Mishustin spearheaded this ambitious social spending plan. Taking over from his predecessor Dmitri Medvedev's unpopular government, Mishustin is expected to not only fix Russia's economic problems but to also secure victories for United Russia in upcoming elections. Mishustin's appointment has also generated expectations of a wider spending policy that would seek to significantly boost Russian economic growth. But the ambitions of government spending are now appearing to fall well short of that.

The Ministry of Economic Development has estimated that the new spending efforts will bump up Russia's 2020 growth from the forecasted 1.7 percent to 1.9 percent. But others have suggested this may be too optimistic an assessment. Analysts at the Russian Central Bank have warned that as purchasing power is increased through the social spending plan, the additional availability of disposable income will raise the demand for imports. So rather than being spent within the Russian economy, a significant portion of the newly available capital could still escape Russia, hampering the impact on overall economic growth.

Finance Minister Anton Siluanov has since clarified how the government would come up with the 2 trillion rubles needed to execute the spending plan over the next two years. Through the sale of shares in the financial firm Sberbank, which is currently owned by the Russian Central Bank, the government will be able to indirectly generate revenue from its National Wealth Fund without breaking the rules limiting Moscow's use of the fund, which is financed by oil rent. But while this creative financial maneuver between the Russian Central Bank and the government frees up the capital needed to fund Putin's social spending ambitions, it also emphasizes the very limited nature of the new government's stimulus measures.

This limited scope, however, does not take away from the political value of Putin's spending plan, as the increasing purchasing power is still expected to have a strong electoral effect. If segments of Russia's population actually witness improving living conditions because of increasing purchasing power, it will help boost the popularity of the government, and thus the prospects of the ruling United Russia party ahead of the 2021 and 2024 elections.

But even these limited political benefits still depend on the effective implementation of the spending efforts, which Moscow has proven unable to guarantee in the past. Indeed, Moscow's policy of fiscal restraint has already limited plans to invest in the country's industrial and infrastructure development in order to boost economic growth. Last year, 1.1 trillion rubles remained unspent because of bureaucratic bottlenecks. To tackle this impediment, Mishustin has focused on increasing the transparency of government spending through monitoring mechanisms and has also called for amendments to public procurement legislation. Putin, meanwhile, has tasked Russia's Federal Security Service with rooting out corruption in another larger, pre-existing spending plan to improve the country's infrastructure and living conditions. Such reform and enforcement efforts, however, will have to be executed concurrently with the actual spending measures, which will likely add to the constraints on increasing economic growth.

But regardless of whether the current spending ambitions are feasible, it's notable that Russia has once again foregone the option of leaning on its National Wealth Fund and other reserves to boost the engine of its economy. These reserves, which currently stand at a value of around $124 billion, could potentially provide a significant amount of additional funding to the 2020 budget. It's estimated that up to 2.1 trillion rubles ($34 billion) could be made available this way. The National Wealth Fund is filled with profits from oil production at a value of more than $41.6 per barrel, meaning that as long as oil prices remain above that level, the fund will provide constant income. Russia's legislation on government spending requires the liquid reserves in this fund to measure over 7 percent of its GDP, however, which has kept the fund under lock. Given the expected income this year, a portion of the fund is expected to become available during 2020. But even then, the government would still be limited by separate legislation limiting government spending to only 0.5 percent of GDP.

Instead of trying to gain greater access to these reserves to push economic growth, however, Russia is sticking with its usual method of actually increasing restrictions on the use of the fund. A proposed Russian law suggests that the profitable investments made by the fund should be capped to a maximum of $15.7 billion per year, and only for investments with higher returns than the bond market. These measures will still allow creative maneuvers such as the Sberbank acquisition from the Central Bank, but will severely limit the actual direct use of the fund in the composition of the federal budget.

The use of these reserves, as well as the overall position on stimuli, has long been a topic of contention between separate actors within the Russian government. While the Central Bank and the Ministry of Finance have closely guarded the culture of fiscal restraint, the Ministry of Economic Development has constantly emphasized the need for greater investments to meet ambitions of growth. Given the growing volume of reserves and the continuing debate over its application, the Kremlin may yet change its position on this in the coming years. But for now, the Mishustin government has clearly laid out a roadmap for continued restraint, leaving Russia's economy — and potentially its long-term political stability, as well as its global position — vulnerable to shocks.

A Slowing Economy Tests Russia’s Tight Spending Habits is republished with the permission of Stratfor Worldview, a geopolitical intelligence and advisory firm.