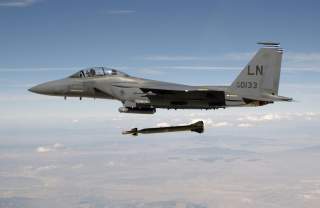 Qatar says it will take delivery of the first six F-15QAs from Boeing by March 2021. Another six will be delivered three months later.

According to Brigadier General Issa al-Mahannadi the rest of the 24 jets will be delivered every three months in batches of four aircraft.

As reported by Reuters, Qatar signed agreements to buy warplanes from the U.S. as well as Europe last year after a political dispute broke out between it and neighbors Saudi Arabia, the United Arab Emirates, Egypt, and Bahrain.

“This is not a purchase, it is a strategic partnership with the U.S.,” Mahannadi said.

The tiny but wealthy Gulf state will begin sending eight pilots per year to the U.S. for training this year, Mahannadi added, while transitioning some of its experienced Qatari pilots to fly the F-15s in order to establish a 53-person aircrew for them by 2023.

The programs are part of Qatar’s drive to beef up its air power and meet the needs of Qatar Emiri Air Force (QEAF) that has also inked deals for 12 more French Rafale fightersand 24 Eurofighter Typhoon aircrafts since the rift with its neighbors kicked off.

Boeing was awarded the contract for the F-15s.

Qatar in August announced it would expand Al Udeid, which hosts the largest U.S. military facility in the Middle East, to accommodate the F-15s and other fighter jets.

Mahannadi said construction on the area for the F-15s would start in 2020 and be completed by 2021, in time to receive the first delivery.