The Quad Won’t Be Built In A Day, So Start Now 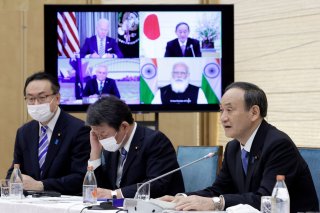 An alliance between Japan, India, Australia, and the United States doesn’t exist—at least, not yet. The ambition is meritorious, but to become a reality it takes a bit more than joint statements and logging into Zoom. Fortunately, leaders don’t need to look far for a much lighter lift. Putting muscle into existing bilateral strategic energy partnerships, which have a mixed record at best, would strengthen the Quadrilateral Security Dialogue’s foundation.

Let’s start with India, which pledged historic civil nuclear cooperation with the United States in 2005. Such “123” agreements (jargon derived from Section 123 of the Atomic Energy Act) are essential for American nuclear energy companies to access new export markets. Without them, they simply can’t play. Though the agreement wasn’t finalized until 2008, not a single U.S. reactor has been constructed. In April 2018, the Trump administration signed a new “strategic energy partnership” with India and both sides promised to work together on a long list of things. At least this 123 is good for forty years. Meanwhile, Indian imports of liquefied natural gas (LNG) from the United States are growing measurably.

Next up, the Japan-U.S. Strategic Energy Partnership. Signed in November 2017, this one-page document was intended to spur a wave of joint infrastructure projects across Asia and Africa. Since 2017, the United States has quintupled its exports of LNG to Japan, but this statistic doesn’t scratch the itch both countries feel in relation to China’s Belt and Road Initiative. To oversimplify things ever so slightly, the opportunity is clear: building facilities in other countries—to enable LNG imports and boost natural gas consumption—would increase market share for U.S. exporters and accelerate the development of a more liquid and transparent global market for this particular commodity, which benefits a large consumer like Japan. No joint projects have been constructed, though many workshops have been held, and the concept of an LNG import terminal in Vietnam remains persistently prospective.

Finally, the bilateral security relationship between the United States and Australia may be as strong as any bond in the world, but policymakers often forget that the two are competitors in the realm of energy and natural resources. Ironically, the U.S. Export-Import Bank provided direct loans for the construction of Australian LNG export terminals in the 2012–13 period, precisely at a time when the North American energy renaissance was well underway. Cargoes from Queensland, Western Australia, and the Northern Territory compete directly with shipments of natural gas produced in Texas, Pennsylvania, and Louisiana. Various fora—the Strategic Partnership on Energy in the Indo-Pacific, the Energy Security Dialogue, the Asian Pacific Economic Cooperation Summit—provide opportunities for collaboration in other areas, such as electrification efforts in Papua New Guinea. In 2020, the Trump administration also allowed Australia to lease part of the Strategic Petroleum Reserve to fulfill its international emergency-response requirements.

All of these relationships are vibrant in their own way. Commerce proceeds apace and things take time. As a geopolitical response to the energy infrastructure financed and secured by the Belt and Road Initiative, these agreements don’t answer the mail—but with just a little bit of attention, such partnerships could bear substantive fruit.

In the same way that steel reinforces concrete, the way to strengthen bilateral relationships is through tangible accomplishments—pipes, plants, pumps—that would not otherwise exist. Get the nuclear reactors to India and claim the win for greenhouse gas reductions. Build regasification facilities with Japan across the Indo-Pacific region, diversifying everyone’s sources of energy and improving health outcomes across the spectrum. Prioritize the development of critical minerals with Australia.

Extraction is probably a bit easier in Western Australia than in the American West, but separation and processing of the raw ore is difficult to do anywhere—suggesting the broader supply chain could and should be a pillar of the partnership. Such minerals are vital for renewable technology and electric vehicles, as well as basically everything else.

Productive bilateral cooperation on energy and natural resources allows for plenty of window dressing, with the added benefit of making a difference. The U.S. territories and freely associated states across the Pacific also provide potentially helpful launchpads for lateral initiatives of all types, beginning with studying “insular energy” systems and certainly not ending there. The United States needs not just the oft-cited “seat at the table,” but to put money on that table. The Biden administration has inherited a set of tools far more powerful than the autopen, including export credit, development finance, trade missions, and feasibility studies.

Put those tools to work on the bilats. It’ll make the Quad a lot easier to build.

Tristan Abbey served as senior policy advisor for strategy and economics at the U.S. Senate Committee on Energy and Natural Resources and as a director for strategic planning at the National Security Council. He authored The Strategic Energy Imperative, a majority staff report published by the Senate in September 2020.