This Quadcopter Could Keep Marines Spread Throughout the Pacific Supplied 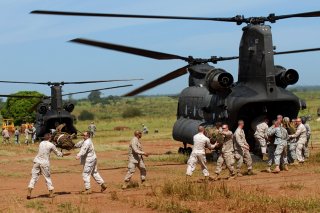 “An army marches on its stomach.” The adage, attributed alternately to Napoleon Bonaparte or Frederick the Great, remains as accurate now as when first spoken. And though the quote references an army, the proverb is today more applicable to the United States Marine Corps of tomorrow.

The Marine Corps is currently in the throes of enormous change. In acknowledgment of the threat posed by an increasingly assertive Chinese foreign policy, the Corps is implementing Force Design 2030. The force redesign attempts to transform the Marine Corps from a land force optimized for counterinsurgency operations in the Middle East to a distributed, decentralized force with a lighter, more amphibious presence.

As a part of Force Design 2030, groups of semi-autonomous Marines spread out throughout the Pacific would conduct search-and-destroy missions, hunting down enemy surface vessels and even submarines using a wide variety of new weaponry. From remotely-operated ship-hunting trucks to rapid island assault and even hunting down ships, the Corps is arguably on the cusp of becoming the Indo-Pacific’s preeminent force.

Distributed operations in any theatre depend on logistics: bullets, beans, and bandaids have to regularly reach the front lines to keep a force in the fight. However, for the Marine Corps, logistics will be particularly challenging—overcoming the Pacific Ocean’s tyranny of distance won’t be easy. But this quadcopter could help.

A cargo vehicle, appropriately called KARGO, made its debut this week. Kaman, the company that builds the quadcopter, calls it an “in-the-box logistics solution” for the United States Marine Corps’ distributed operations.

The vehicle is small enough to fit inside a standard shipping container but large enough to carry hundreds of pounds of payload hundreds of miles away either in a conformal supply pod mated to the copter’s underside or slung in a net below the vehicle.

Kaman’s KARGO “self-deploys beyond 500 nautical miles and carries up to 800 pounds of payload,” the company website states. “With built-in autonomy, KARGO Unmanned Aerial Vehicle (UAV) will be unconstrained by no-go terrain, will sense and avoid obstacles en route, and deliver payloads with pinpoint accuracy.” And with just “two personnel it can transition from full-stow to flight-ready in just minutes.”

The Marine Corps’ Force Design 2030 hinges on keeping Marines supplied and in the fight. Logistics ships will likely take on much of the Corps’ supplies, but small, effective quadcopters like Kaman’s KARGO could fly material through the last stretch and onto shore.