Quarterback in the Sky: Why This is the Year the F-35 Stealth Fighter Will Be Unleashed 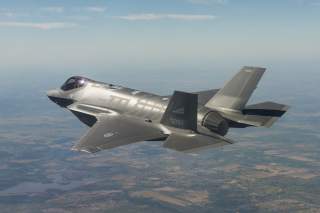 As previously discussed by The National Interest, the newly formed F-35A demonstration team has an ambitious performance lineup planned for 2019. The team’s first public outing is slated for later this month, at the Melbourne Air and Space Show at Orlando Melbourne International Airport, but their recent performance at Davis–Monthan Air Force Base (DM AFB) offers a valuable first look at the upcoming F-35 aerobatic routine.

The routine was part of an official certification event and, therefore, closed to the public. However, The Aviationist has published a handful of photos from the occasion. Among them is an overhead shot of an F-35A flying with an open weapons bay. Yet another depicts demo pilot Capt. Andrew “Dojo” Olson inside a stationary F-35A, handing off his helmet bag in preparation for the rehearsal flight.

Olson, who is also the commander of the demonstration team, went on to give a lengthy and, in many ways, revealing interview to The Aviationist. He was keen to highlight some of the F-35’s under-the-food features that might otherwise be overlooked by general audiences: “The stuff you see at the airshow is really awesome, but it doesn’t even touch the tip of the iceberg of what this airplane is. When you get out there and actually employ this airplane, you’re talking stealth, you’re talking sensor fusion, and then ‘information fusion’ is kind of another word we’ve been using recently…  When we go out there we’ve got tons of gas, we can hang out for a long time and we can paint the battlespace for everybody and share that situational awareness with our fourth gen brothers and sisters and be a more effective fighting force.”

An F-35 design concept popularized last year, “Information fusion” refers to the F-35’s ability to generate a dynamic picture of the battlefield drawn from its myriad onboard sensors. As noted by Olson, the F-35 can then play “quarterback” by feeding some version of this data to nearby, friendly fourth-generation fighters.

At several points in the interview, Olson placed the F-35 in a comparative context with its F-22 and F-16 predecessors. “This year we’re going to fully unleash the full maneuvering envelope of the F-35. This airplane just takes the flight controls, and puts it on a whole different level. We’ll be able to do some similar maneuvers that [F-22] Raptor does, and without thrust vectoring, just with the advanced flight controls that put the aircraft into a post-stall flight regime and keep it fully controllable,” he said.

But as Lockheed Martin and the US Air Force embark on a marketing blitz to re-sell the public on the F-35 on the heels of skeptical cost-benefit analyses in 2018, Olson’s comments speak to a weakness of the air show format. On paper and in reality, that the F-35’s can perform a similar repertoire of aerobatic maneuvers to the F-22 Raptor but without thrust vectoring is an impressive difference, but a difference lost on general audiences who see little more than similar-looking planes performing similar tricks. In the age of AI, stealth, and information, the F-35’s most important improvements over its fourth-generation predecessor are also the ones that cannot be readily seen or easily demonstrated to the general public.

Olson and other F-35 PR representatives have their work cut out for them, but this recent interview gives a good sense of their strategy: to let the F-35’s routine speak for itself on the one hand, while persistently hammering away at the F-35’s improvements with easily digestible soundbites on the other.