Question Asked: Could the U.S. Navy Destroy North Korea In a War? 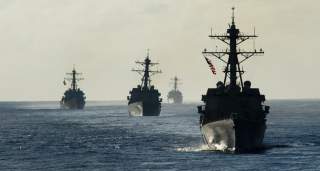