QUESTION: Does Germany or America Make the Best AR-15? 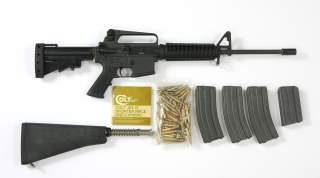 Key point: Germany's gun market is a hotbed of innovation.

Mention a German take on an AR-15, and most people will imagine the HK416. However, many other German manufacturers have made their own take on the AR platform, from simple clones made by Oberland Arms to Haenel, which makes another variant of the piston-driven AR rifle.

But why would German companies want to make yet another take on the AR as opposed to their own rifle?

The simplest reason is that the German civilian shooting community wants AR-15s of their own. American ITAR regulations prevent most foreign customers from buying American-made AR-15s, or force them to buy them at a significant markup, so German companies stepped in to fill the void.

Oberland Arms, Schmeisser, Hera Arms, and DAR are all German sporting rifle companies that make variants of the AR-15. Most of them were founded relatively recently, some as recent as 2008. While some rifles produced by these firms are relatively vanilla, such as the “Black Label” Oberland Arms offerings, which resemble early M4 Carbines, other firms produce rifles with free-float rails similar to the latest competition and combat rifles.

DAR’s DAR-15 features an upper receiver with a large flange that is used to mount a free float rail. While similar features have been seen on some American rifles, the DAR approach is significantly larger, and perhaps over-engineered.

The use of custom-machined billet lowers and uppers seem to be common in the new German rifles, as this allows manufacturers to make their receivers visually striking and distinct. Hera Arms’s offerings go this route, they feature distinct magazine fencing designs and “15” machined into the lower receiver.

However, the rails on the Hera Arms and Schmeisser offerings don’t seem to be as robust as the DAR rail. While free-floated, they appear to use a generic free float rail that pinches on a regular barrel nut, which isn’t the most stable or durable. Most contemporary “rigid” rail designs like the Daniel Defense DDM4 rail, or Hodge Defense Wedge or Pinch Lock rails use custom plates and barrel nuts to create a significantly more secure lock-up.

The most successful German AR-15 (other than the HK) when it comes to use by military and police organizations is the Haenel CR223. Unlike all the rifles above, which retain the standard Stoner internal-piston gas operation, the Haenel rifle uses a short-stroke tappet operating system similar to the HK416, SIG 516, and other short-stroke AR rifles. Apart from the gas system, the Haenel rifles are relatively similar in layout to a standard AR, lacking the ergonomic improvements of similar rifles such as the HK416A7 which has a reduced throw safety/selector and ambidextrous bolt release.

However, the Haenel is one of two rifles left standing on the Bundeswehr’s tender for a new assault rifle, competing with the new HK433. Sig Sauer, Inc. dropped out of the competition, complaining that the German tender was written in a way that would have been unfavorable for American-manufactured SIG 516 rifles, and Rheinmetall/Steyr dropped out after possibly determining that the contract was not profitable enough. Haenel CR233s have also seen service with the Hamburg police, supplementing H&K MP5s.

Regardless, it’s a testament to the quality and longevity of Stoner’s design that the rifles have seen a renaissance in Germany, outcompeting local rifle designs, nearly sixty years after the original design saw service with the United States. While the AR-15 may lack the folding stock and refined ergonomics of the HK433, the simple internal-piston design is renowned for its low recoil, and the slim, minimalistic design of the rifle’s handguards make it lighter and more ergonomic than other recent rifles. The massive aftermarket for AR parts and accessories also no doubt contributed to the renaissance.

But while Germany may produce its own AR-15s, the hotbed of innovation for the rifle is still the United States. Products such as RadianWeapons ’s ADAC lower receiver are known among European sport shooters for being fast and innovative, and Germany has yet to produce similar refinements on their own.

Charlie Gao studied political and computer science at Grinnell College and is a frequent commentator on defense and national security issues. This article originally appeared in July 2019 and is being republished due to reader interest.