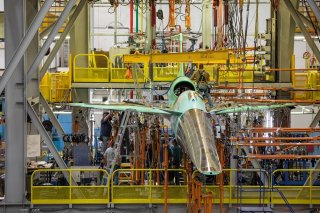 The world’s most successful supersonic commercial airplane, the Franco-English Concorde, flew from 1976 to 2003. It was ultimately doomed by a variety of factors, including the enormous sonic boom it created during supersonic flight.

In cooperation with Lockheed Martin, NASA wants to bring back commercial supersonic flight by significantly reducing boom noise. The new aircraft being developed is the X-59.

The X-59 is an odd-looking bird. With a duckbill-like nose, a modified delta wing, and small canard wing surfaces forward of the cockpit, Lockheed Martin says that the aircraft will fly at Mach 1.4 speeds, or nine hundred twenty-five miles per hour, and cruise at 55,000 feet. Lockheed Martin says its noise will be about seventy-five decibels, or about as loud as a door closing.

Lockheed Martin says that the X-59 QueSST, an abbreviation for (Quiet SuperSonic Technology) will “collect community response data on the acceptability of a quiet sonic boom generated by the unique design of the aircraft. The data will help NASA provide regulators with the information needed to establish an acceptable commercial supersonic noise standard to lift the ban on commercial supersonic travel over land.”

If the project can achieve relatively quiet supersonic flight, it “would open the door to an entirely new global market for aircraft manufacturers, enabling passengers to travel anywhere in the world in half the time it takes today.”

Into the Assembly Phase

A non-flight X-59 prototype is being assembled and tested at a plant in Texas. There, the prototype’s sections, including nose, tail, fuselage, and wings, will be pieced together, and the aircraft will be powered up for the first time.

“The first goal is to make sure that the airplane can handle the anticipated loads during flight,” Silva said.

The second goal is the “calibrate the sensors built into the X-59 that are designed to tell the pilot how much stress is being measured at that point on the airplane. This is done by comparing what the sensors say with the known amount of stress being applied during a test.”

The third goal is to “take the data and compare it with the computer models we used in designing the airplane in the first place and make sure what we thought was going to happen turned out to be accurate and the airplane is built as designed.”