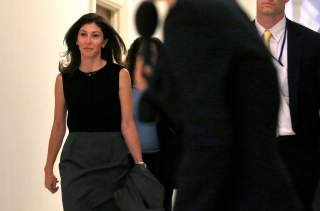 Page was discovered to be having an affair with former deputy assistant director Peter Strzok, who worked on special counsel Robert Mueller’s investigation before he was removed for exhibiting bias against President Donald Trump in his text messages with Page. Thousands of the lovers’ text messages, which were sent on agency-issued phones, were released by the Department of Justice (DOJ) and FBI in 2017.

Maddow criticized the conservative media and Trump for allegedly targeting Page and praised the former lawyer’s extensive history with the FBI during Tuesday’s interview.

“This has been going on for two years now,” Maddow said when discussing the alleged attacks on Page by the media and Trump. “The president and his allies in Congress and in particular the conservative media invoking the name Lisa Page as though the name itself is an epithet.”

“Lisa Page is real life person who built a career before she became this kind of target for the president and his allies,” the liberal MSNBC host added.

In a lengthy preview to the interview, Maddow described Page’s resume in depth. She noted that Page was a federal prosecutor, worked in various positions at the Justice Department, and named several high-profile cases where the former FBI lawyer played “significant roles.”

The MSNBC host attacked the Justice Department for “literally” inviting “reporters to come to the department to view” Page’s “personal text messages.” Maddow did not note that the messages were sent using agency-issued, not personal, cell phones.

“The Justice Department just shoveled these texts of their own employees without context, and of course without the senders’ permission, which is ultimately how Lisa Page came not to be not just on the list of people the president wants tried and convicted for treason, but also the one he calls over and over ‘Peter Strzok’s lovely FBI lover,'” Maddow said.

The MSNBC host played clips of Trump mocking Page during campaign rallies and claimed that Fox News was delighted at the scenes.

“He mocks her at campaign rallies in graphic language and occasionally to graphic noises to the delight of Fox News,” Maddow said Tuesday. “That’s one way to counter program your own impeachment. Attack and threaten and try to humiliate anyone involved in the investigation against you that has brought you to this point.”

Maddow also noted the Dec. 1 interview with Page by The Daily Beast, highlighting that the former FBI lawyer “was convinced that she followed all the rules.” She said that the process has seen Page “effectively vindicated.”

“Even though Page has effectively been vindicated by the process, by two different Inspector General investigations, she really is still going through this,” according to Maddow. “She’s still a target. Still a target – including specifically and personally of the president. Even as that same president is finally being impeached for what he did.”

Page is now suing the DOJ and FBI for releasing her text messages, alleging that it was “illegal.”